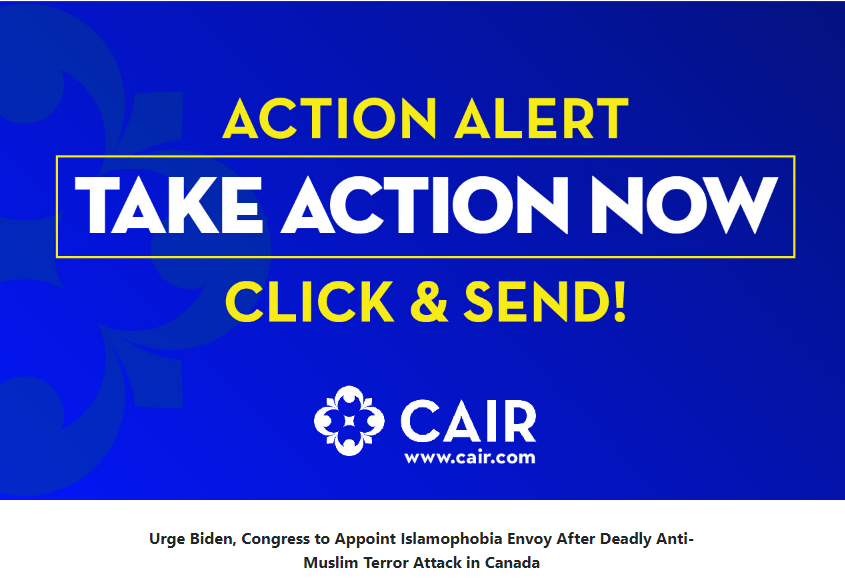 In a statement, CAIR called on President Biden to appoint a Special Envoy to Monitor and Combat Islamophobia, which has spread from America and endangered Muslims in Austria, China, Burma, France, India, Israel, Kashmir, and numerous other countries.

Canadian police say 20-year-old Nathaniel Veltman jumped the curb in his vehicle and struck five members of the family, killing four of them and seriously injuring the other in a deliberate attack that targeted the victims because they were Muslims.

“Yesterday’s anti-Muslim hate crime in Ontario, two hours away from Detroit, should serve as a dreadful reminder to the United States about the lethal danger of anti-Muslim bigotry. Islamophobia not only manifests itself in hate crimes across the border or overseas. It permeates American institutions through harmful and hateful policies supported by wealthy anti-Muslim propaganda machines. It must be stopped.”

In May, CAIR joined the US Council of Muslim Organizations (USCMO) in urging the Biden administration to create an office to monitor and combat anti-Muslim attacks.

Washington, D.C., based CAIR is also calling on Congress to pass legislation creating a permanent office to monitor and address Islamophobia in the United States and worldwide.