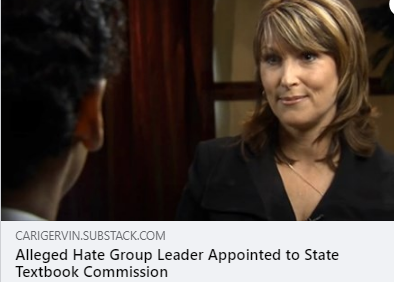 Cardoza-Moore leads the Franklin, Tenn., based Proclaiming Justice to the Nations (PJTN), which the Southern Poverty Law Center has designated as an anti-Muslim group.

“This individual should not be anywhere near the selection of textbooks in Tennessee or any state. She clearly has anti-Muslim views that inevitably would negatively impact any textbook selection. We would urge the speaker to rescind the appointment immediately.”

PJTN initiatives include “Stop Access Islam.” Cardoza-Moore led opposition to a mosque in Murfreesboro, Tenn., and opposed a mosque in New York City. On “The Daily Show,” she falsely claimed that “30 percent” of Muslims “are terrorists.”

CNN: Laurie Cardoza-Moore is leading opposition to the Murfreesboro mosque

Laurie Cardoza-Moore speech at the rally against Islamic Center in NYC (Aug. 22, 2010)

Cardoza-Moore says “Islam is a political system of global domination,” that 30 percent of Muslims are terrorists and there are already 35 training camps in America