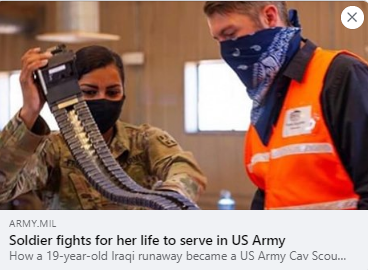 SEE: U.S. Army News “Soldier fights for her life to serve in US Army”

“We are calling on the U.S. Army to immediately take down this proselytizing ‘news article,’ which promotes Islamophobic, anti-Muslim, anti-Iraqi, and anti-Arab themes while promoting a particular religion,” said CAIR Director of Government Affairs Department Robert S. McCaw. “Official military publications must not foment racism against any ethnicity or bigotry against any faith.”

The article follows the story of an Iraqi woman who tells her story of converting from Islam to Christianity and becoming a U.S. Army interpreter, decisions which the article attributes to a series of Christian auditory and visual religious visions.

The interpreter also makes sweeping generalizations about Iraqi society, claiming that any and all Iraqi women who leave their homes will either be murdered in an honor killing or kidnapped and forced into prostitution.

CAIR said the editor’s note, which qualifies the “soldier’s views do not necessarily reflect the views of the Army,” is not enough to distance the publication from the article’s open resentment and hostility towards Islam, Muslims, Iraqis, and Arabs.