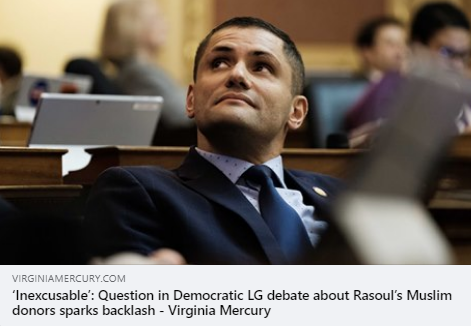 (WASHINGTON, D.C., 5/26/21) – The Council on American-Islamic Relations (CAIR), the nation’s largest Muslim civil rights and advocacy organization, today called on Virginia’s political leaders to reaffirm the right of American Muslims to full civic participation following a debate last night in which a Muslim candidate for Lieutenant Governor of Virginia was asked whether he can “assure Virginians if you’re elected, you’ll represent all of them, regardless of faith or beliefs?”

“There is no justification for questioning whether a candidate can perform the duties of their office because they received a campaign contribution from a donor of the same religious background – no matter what religion that may be.

“Had the Muslim candidate been of the Christian, Jewish or of another faith tradition, there would have been immediate calls from the public for an apology.

“Holding Muslim candidates running for office to a different standard creates barriers for Muslims to be civically-engaged and endangers the Muslim community by propagating Islamophobic narratives.

“We call on political leaders in Virginia to reaffirm their commitment to supporting the civic participation of all Americans, regardless of belief or lack of it.”

NOTE: As a 501(c)(3) nonprofit, CAIR does not endorse or oppose any candidate running for office.

Last month, Judge Zahid Quraishi, the first ever Muslim nominee for Federal District Court, was asked by Senate Committee on the Judiciary Chairmen “What do you know about Sharia Law?”

SEE: CAIR Op-Ed: What Senators on the Judiciary Committee Should Know About “Sharia Law”