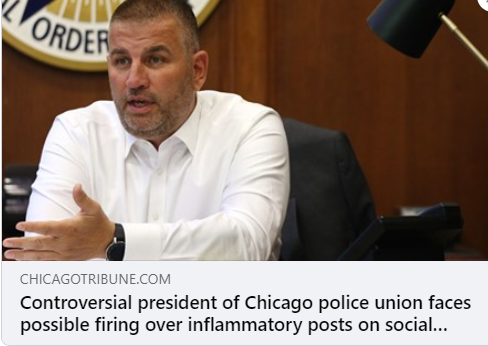 (CHICAGO, IL, 12/21/2020) – The Chicago office of the Council on American-Islamic Relations (CAIR-Chicago) today called for the firing of Chicago Police Officer John Catanzara, leader of the Fraternal Order of Police Lodge 7, the city’s largest police union.

CAIR-Chicago’s call comes after offensive posts on social media surfaced via the Chicago Police Board following mention of ongoing investigation, which was made public late last Thursday. One of Catanzara’s messages disparaging Muslims read, “they all deserve a bullet.” Another messaged a year earlier declared, “Wtf its seriously time to kill these (expletives).”

“Any officer who fails to understand and abide by the basic norms of human decency and respect for dignity, and who harbors prejudices and bigotry, has zero business enforcing laws on the rest of us, especially behind a badge and a gun, let alone in a leadership position. Catanzara’s behavior is a disgrace to the police force and the city, and anyone who stands by him and defends his actions is guilty of the same.

“His long and concerning track record of violations, suspensions, near-firings and other disciplinary issues as well as his mingling personal politics with his job cannot be ignored and really begs the question how he was allowed to be empowered on our streets for so long.

“We are highly disappointed in Superintendent Brown for playing ‘boys club’ with this straight-forward situation and not displaying the courage and integrity necessary to go with the firing recommendation of the chief administrator of the Civilian Office of Police Accountability and thus spare the city any further drama and loss of trust. We further note that this is not the first time that this is the case.

“The Chicago Muslim community is appalled and has its confidence severely shaken. We and our allies will be watching closely how the force, and the city deal with its bad apples.

“CAIR-Chicago stands with the justice movements demanding respect and protection for African-American lives from policing overreach, and notes one of its lessons, that it is not just bad apple officers that hurt our collective communities, but the culture of harboring them and their bigotry. Minorities of all backgrounds will not sit idly by as taxpayer-funded forces that are supposed to serve, protect and maintain public trust, become a breeding ground for ideas and attitudes that vilify them, call for their killing as in the case of Catanzara, or actually kill them as in the case of Van Dyke and the many others who have taken the lives of our African American youth lightly.”

CAIR-Chicago is the Chicago office of America’s largest Muslim civil liberties and advocacy organization. Our mission is to defend civil rights, fight bigotry, and promote tolerance.