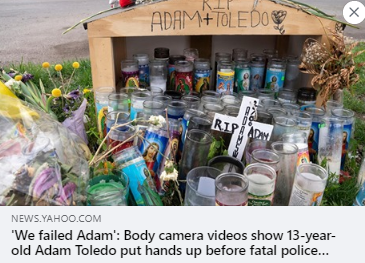 “Today, the Civilian Office of Police Accountability (COPA) released video footage of Chicago police officer Eric Stillman shooting and killing Adam Toledo. The heartbreaking video shows how it took less than two minutes for officers to get a notification, show up, and chase and kill the 13-year-old boy.

The Toledo family has asked for privacy and CAIR-Chicago will respect that request. But this shooting is yet more proof that we need to fundamentally change our approach to public safety in our country. Nothing should be off the table when it comes to saving the lives of our kids–and the status quo is unacceptable.

COPA will continue its investigation and issue its findings when they are ready. That investigation must be thorough, transparent, and timely.

But nothing will bring Adam Toledo back, and not even time will heal the pain of Adam’s family. Our city must do better.

CAIR-Chicago is committed to being part of the solution, and as such has worked on and endorsed the community-supported ordinance establishing a commission to oversee the Chicago Police Department. The Empowering Communities for Public Safety ordinance is one small step that may lead to fundamental changes, including changes in policies over which the police commission would have final say. We appreciate the sentiments of care and outrage from our elected officials, but they must be backed up with actions.

We ask that you pray for the Toledo family at this difficult time. And we ask that you to back it up with action by demanding the passage of the people’s ordinance on public safety.”