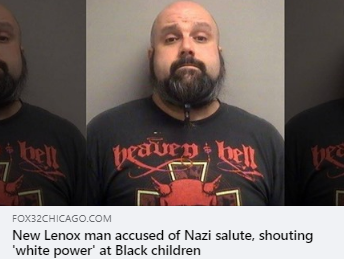 (CHICAGO, IL, 3/24/2020) — The Chicago chapter of the Council on American-Islamic Relations (CAIR-Chicago), the nation’s largest Muslim civil rights and advocacy group, today declared its support for a hate crime charge brought against a man who allegedly yelled “white power” and did a Nazi salute to a family leaving Walgreens on Nelson Road.

The family, a mother and three children, was approaching their vehicle when Justyn Giarraputo, reportedly parked next to them, yelled from his window.

“Violence is not just action. Violence is symbols. Violence is atmosphere. Violence is communication. The Nazis knew this and curated the atmosphere, the symbols and the communication to terrorize, along with the actions,” said CAIR-Chicago Executive Director Ahmed Rehab. “The Nazi salute is hate-motivated violence and has the same debilitating effect as an assault on its victims who belong to historically discriminated against groups.”

He added that the American Muslim community and CAIR are standing in solidarity with all those challenging anti-Black racism, xenophobia, Islamophobia, anti-Semitism, white supremacy, and all other forms of bigotry.