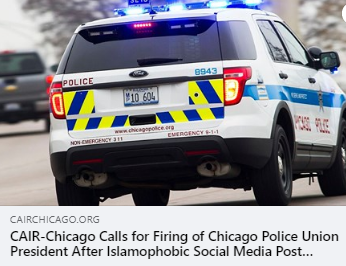 (CHICAGO, IL, 1/18/2021) – On Tuesday, January 19, the Chicago office of the Council on American-Islamic Relations (CAIR-Chicago), the nation’s largest Muslim civil rights and advocacy group, will hold a press conference to call for the termination of Fraternal Order of Police President, John Catanzara in advance of the police board hearing scheduled for Thursday evening in which the board will make a determination. The Civilian Office of Police Accountability (COPA) has also called for his termination.

WHAT: Virtual Press Conference Calling for Termination of John Catanzara

Catanzara has a history of making headlines for all the wrong reasons, from disparaging Muslims and other communities to defending the recent storming of the Capitol by a Trump-incited mob, describing the incident as “trespassing” and as “voicing” legitimate “frustration.”  Catanzara also reportedly has a record of misconduct, misogyny, and classism.

Some of his past posts inciting hatred and fear of Muslims resurfaced during a Chicago Police Board meeting in December 2020. In a post, he implied Muslims to be “savages” and that, “they all deserve a bullet.” The Civilian Office of Police Accountability (COPA) recommended his firing to the Chicago Police Board, based on 17 different statements made online by Officer Catanzara, which amount to 56 violations of the rules of conduct.

On December 21, Responding to CAIR-Chicago’s calling for his termination, on WBBM radio, Catanzara doubled down, saying, “Any group that is OK with genital mutilation of little girls as a religious practice is so far on the fringe of society, I could really give a damn what they think.” (CAIR-Chicago is “not OK” with female genital mutilation and condemns it. Likewise, with the overwhelming majority of Muslims at large. The Grand Sheikh of Al Azhar, the highest authority in Sunni Islam and Shariah law, has condemned and prohibited it.). Catanzara further scoffed, “yeah what’s next, we still have Mayans now in Mexico, there is still some decedents of the Mayans, are we going to start allowing them here and having human sacrifices because it is their part of their culture.”

[http:///s/john-catanzara.png]In a Facebook post dated January 17, 2020, Catanzara posted a gruesome video of a mob killing a woman in Afghanistan, commenting that “This is the reason MANY Americans are leary [sic] of a large segment of muslim’s [sic], especially those who support Sharia law. For those of you liberal blind sheep who don’t grasp the reality of what’s before us… watch the whole video.  This is the life many want to bring to this country. Deny reality all you want!”

Facing backlash, Catanzara has attempted to walk back some of his comments, while doubling down on others. He called his Capitol comments “misinformed.” On Friday, he filmed a lengthy Facebook video to address the Muslim comments, most of which was dedicated to describing the aforementioned brutal mob killing in gruesome detail.

“It is clear the end-game Catanzara is playing:  justify and advocate for immigration bans of minority groups he deems undesirable. We call this prejudice. It is clear the strategy he is employing to achieve his end-goal: point to instances of sensational crimes by individuals or unusual/antiquated practices by a minority to stoke fear and suspicion of the great majority. It is an old page from the bigot playbook whether he realizes it or not. You can see this formula play out in the bizarre Mayan quote about Mexico, as well in his Muslim quotes where he encourages fear of ‘large segments of Muslims’, his own words, for the bizarre and unusual mob crime incident in Afghanistan that was itself prosecuted and over 40 individuals sentenced.”

“Let me be even more clear: Catanzara’s alleged outrage against female genital mutilation is itself not the problem, we share that outrage. His alleged outrage at the mob killing crime he posted about is not the problem, we share that outrage. The problem is in his intentional attribution of these crimes to ‘large segments of Muslims,’ and employing the tactic of encouraging a public reaction against Muslims in the context of horrible crimes by some. In fact, that is the textbook example of Islamophobia and bigotry. This would be like posting a video of a lynching or a hate crime or news of church pedophilia and then saying ‘this is why we should be weary of large segments of White Christians” and asking if this is the life we want to bring here with European immigration that might bring in more White Christians. It is that ignorant, and that misinformed.

In fact, ‘misinformed’ is the word Catanzara used to describe himself after a backlash against his earlier comments supporting and defending the infamous storming of our nation’s capital. But one must ask, ‘why was he misinformed’ when your average decent, educated American was not? If his bias causes him an impairment of judgement, or if his cognitive skills or his ability to acquire information is suspect, it poses danger to our communities to have him remain as a police officer in a leadership capacity. ‘Misinformed’ is also what he is when it comes to Muslims – and Shariah law, likely adopting the view of Shariah law shared by bigoted Islamophobes and minority Muslim extremist groups alike, rather than the view shared by ‘large segments of Muslims.’ I should be happy to inform him better, but that is as much my job as it is a journalist’s job to walk him through the reality of the Capitol Hill mob attack.

Officer Catanzara’s more recent WBBM and Facebook comments in which he doubles down have shown that he is still unable to reject the latent Islamophobia, bias and prejudice in his thinking and approach to Muslims, while consistently showing his knack for misinformation and the impetuousness to act upon it – a dangerous prospect for a man with a gun and a mandate.