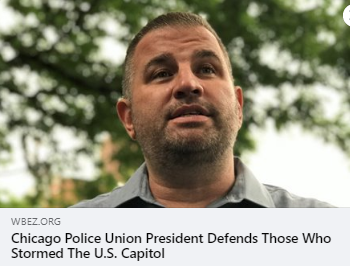 (CHICAGO, IL, 01/07/2021) – The Chicago office of the Council on American-Islamic Relations (CAIR-Chicago) today again called for the termination of Chicago Police Officer John Catanzara, President of Fraternal Order of Police Lodge 7, the city’s largest police union, after he defended yesterday’s infamous Capitol breach and coup attempt that unfolded in a shocking and unlawful show of violence leaving four dead and the entire nation shaken.

“There’s no, obviously, violence in this crowd. They pushed past security and made their way to the Senate chamber. Did they destroy anything when they were there? No,” Catanzara said on WBEZ radio on Wednesday.

Catanzara described the incident as “trespassing” and as “voicing” legitimate “frustration.”

“They get to do what they want. Again, they were voicing frustration. They’re entitled to voice their frustration. They clearly have been ignored and they’re still being ignored as if they’re lunatics and treasonous now, which is beyond stupid.”

Catanzara blamed the media for being at the root of the problem, “basically championing Joe Biden the whole time,” concluding that “this hyperbole and this emotion that the media is spewing now, like this is some kind of end-of-times scenario, is ridiculous.”

The violent breach and attempted coup by armed pro-Trump supporters – including self-professed White Nationalists – egged on to action by President Trump’s claims that the 2020 Election was rigged – sought to forcefully prevent the electoral certification of Biden’s win. Violent seditionists, some armed with guns and explosive devices, broke windows, stormed offices, and left threats for lawmakers.

“Public trust in Officer Catanzara has already long eroded after a shameful history of making Islamophobic, racist, and misogynistic statements on his social media accounts, not to mention his lengthy disciplinary record and public complaints against his conduct,” CAIR-Chicago Executive Director, Ahmed Rehab said. “Now we learn that his recklessness does not only endanger minorities, women and civilians, but the law and his fellow law enforcement colleagues themselves whose lives were put at risk defending lives and property against the violent supremacist criminals he voiced support for. Catanzara has told us who he is. We are waiting for the Chicago Police and the City of Chicago to tell us who they are.”

One of Catanzara’s messages disparaging Muslims read, “they all deserve a bullet.” Another message a year earlier declared, “Wtf its seriously time to kill these (expletives).” He had previously argued that the best way to deal with BLM protesters was to designate them as “terrorists.”

“The Police Board is meeting on January 21st and they must act on the standing recommendation of the Chief Administrator of the Civilian Office of Police Accountability to terminate Catanzara then,” CAIR-Chicago Attorney Tamer Abouzeid said. “That these statements are coming from a police officer, one who was elected by a majority of his fellow officers, underscores the work we still have to do in our city. Chicago’s communities have spoken and have sent City Council an ordinance to create the Civilian Police Accountability Council (CPAC). CPAC, unlike other agencies like COPA or the Police Board, would have actual power to impose policy, hire and fire key personnel, negotiate the contract with the FOP, and more. It is imperative that we enshrine community control of the police into our laws by passing CPAC now.”

CAIR-Chicago is the Chicago office of America’s largest Muslim civil liberties and advocacy organization. Our mission is to defend civil rights, fight bigotry, and promote tolerance.