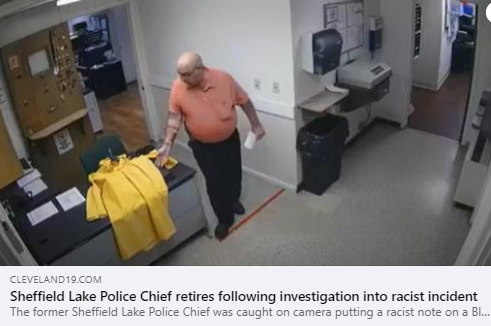 (CLEVELAND, OH – 7/1/2021) – The Cleveland chapter of the Council on American-Islamic Relations (CAIR-OH) today called on the City of Sheffield Lake to require retraining of all police department officers and staff in the wake of the resignation of the Sheffield Lake police chief for a repugnant racist act against an African American police officer under his command.

Sheffield Lake Police Chief Anthony Campo was permitted to resign after an investigation into an incident captured on video where the now-former chief is seen pinning a note that reads Ku Klux Klan onto a police-issued yellow raincoat belonging to an African American officer in the department.

“The City of Sheffield Lake is not served well by allowing Chief Campo to resign in lieu of being fired. The Chief’s despicable act of overt racism cries out for serious disciplinary action and calls into question whether he deserves to be pensioned by the taxpayers after such heinous and blatant conduct unbecoming his position of leadership.

We expect police leadership to act in a professional manner befitting of the public trust. Chief Campo’s act is repugnant and disappointing, but, given the level of systemic racism both overt and implicit in our society, it is not surprising. City leadership needs to take this shameful incident and turn it into a moment of true introspection and action towards positive change.”

To that end, the City must conduct a thorough investigation of the departmental culture that allowed a chief law enforcement officer to perpetrate such an ignorant and hateful act of ethnic and racial intimidation. In addition, all officers and staff of the department should be required to undergo ongoing training on bias-free policing and workplace harassment prevention. City leadership should also engage in training on preventing hiring bias and work to recruit a diverse team for all city departments including public safety.”

The Cleveland Chapter of CAIR-Ohio has trained thousands of police officers on issues of diversity and bias-prevention and helped provide input in support of ongoing reforms of the Cleveland Division of Police mandated by the Department of Justice in the wake of a slew of killings by police of unarmed African American residents.