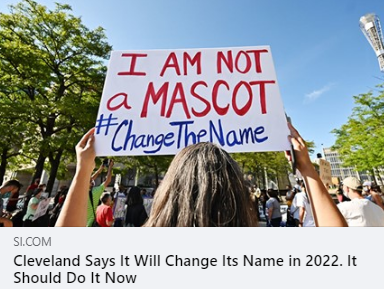 (CLEVELAND, OH, 12/16/2020) – The Cleveland chapter of the Council on American-Islamic Relations’ Ohio office (CAIR-Ohio) today welcomed the recent announcement by Cleveland’s major league baseball team that it will change its name so that it no longer references Native Americans and says that the franchise must move rapidly to change the name now, and not wait until 2022.

The decision by the team’s owner, Paul Dolan, comes in the wake of nationwide efforts to urge sports teams to stop using Native American names and mascot imagery and, after years of efforts by local Native American community leaders, social justice advocates and concerned citizens to get the Cleveland team to change its name.

Native American peoples have long argued that use of such stereotypical names and images perpetuates deeply rooted and long-standing historical injustices and harms their communities by objectifying and tokenizing their humanity.

The Cleveland chapter of CAIR-Ohio is calling for the team to put significant resources towards education and social transformation around the issue of respect for the rights of Native American people.

WATCH: Cleveland Says It Will Change Its Name in 2022. It Should Do It Now

“Whereas we welcome the decision by our Cleveland major league baseball team to finally wake up to the fact that its name causes injury and pain to an entire group of people and thus harms the overall fabric of society, the team cannot move swiftly enough to remedy this wrong.

“Moreover, the team should do some soul searching and put forward significant funding toward raising public awareness about the ongoing social damage caused by such naming conventions, including the use of such names and mascots in our public schools.

“The continued use of such names and mascots by thousands of high school sports teams – including right here in Ohio – advances no legitimate cause and only serves to perpetuate stereotypes about Native American people and cultures. Schools should be promoting a nuanced understanding of our history as well as a recognition of the modern legacy of misguided and morally bankrupt policies and systematic efforts to erase and destroy native societies. By not changing these school names, educators and school leaders continue to disregard and diminish the historical contributions of Native peoples and trivialize their humanity and vibrant societies of today. Educators would do well to inform themselves about research that shows how such names and mascots particularly harm Native American youth and adolescents.

“We encourage all schools in Ohio and across the country to reach out to Native American communities to seek their input and guidance on the use of these names and mascots, in hopes that such dialogues can serve as a springboard to better understanding of the needs of native communities and a fostering of respect for their rights. We hope such dialogues will contribute toward renaming efforts that reawaken in our society positive and inspiring shared values that can move us all forward together.”