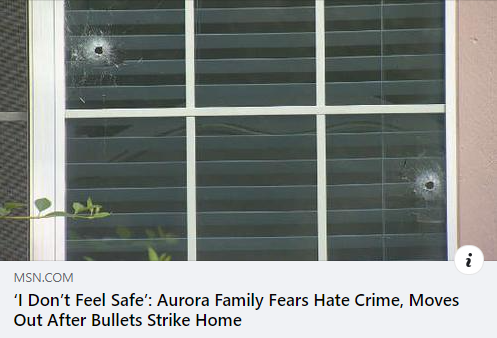 (DENVER, CO – 7/30/2021) – The national office and Colorado chapter of the Council on American-Islamic Relations (CAIR/CAIR-CO) today condemned a possible bias-motivated shooting at an Iraqi immigrant family’s home in Aurora, Colo.

The father, an Iraqi immigrant who worked with the U.S. Army, says shots were fired at the home after midnight on July 19. “I ran with my wife to the kids’ room to make sure they are safe. I found all the glass down. The kids started screaming, crying, my wife the same thing.” The assailants turned off the family’s power before firing so as not to be detected by security cameras. Aurora police say a neighbor saw two white or Hispanic males, possibly teenagers, running from the area after the shooting occurred. Both were wearing dark jeans, and the neighbor did not recognize them as being residents of the neighborhood.

The father said he received threatening calls at work leading up to the shooting. “These people know what they are doing,” he said. “They say, ‘Middle Eastern pig… we are going to do this stuff.’” He said doesn’t feel safe, and his children wake up crying in the night fearing the shooters returned. The family has since moved out of the home. Police are investigating whether or not the incident was a hate crime.

“Because of the threat posed to members of minority communities by rising xenophobia and bigotry nationwide, we urge law enforcement authorities to thoroughly investigate a possible bias motive in this case,” said CAIR-Colorado Acting Board Chair Krista Cole.

In January, CAIR-Colorado welcomed the arrest of three suspects in an arson that killed a Muslim family in 2020 and called on law enforcement to provide more information about the crime, including the motive for the attack.