CAIR Community Advisory: What You Should Know About Trump’s Latest Immigration Ban 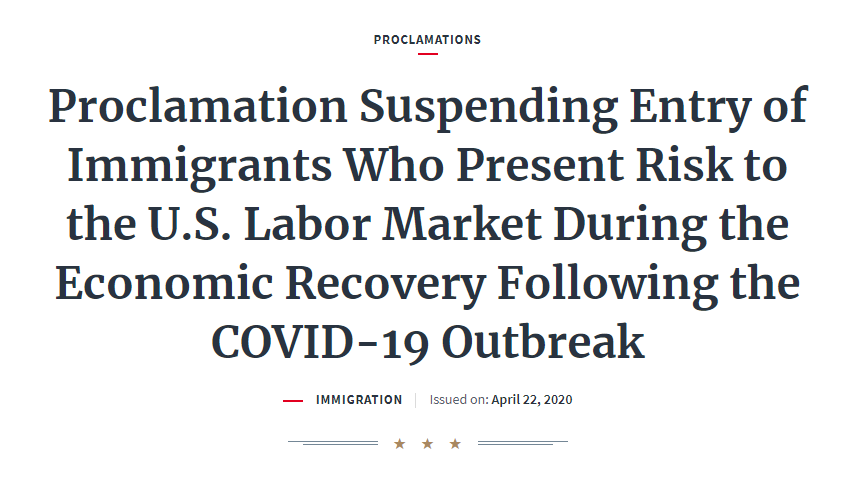 (WASHINGTON, D.C. – 4/23/20) – Last night, the Trump administration issued a Proclamation expanding immigration restrictions in a broad attempt to further its xenophobic agenda while distracting Americans from its own failure to adequately respond to the coronavirus pandemic.

This Proclamation builds on a number of anti-immigrant policies put forward by the administration in the last several years by closing off almost all legal pathways to immigration.

The Council on American-Islamic Relations (CAIR), the nation’s largest Muslim civil rights and advocacy organization, views this proclamation as nothing more than a blatant attempt to pit communities of color and immigrants against one another.

The Proclamation exploits the record levels of unemployment caused by the pandemic, to restrict immigration under the guise of protecting workers and minorities. Targeting immigrants does nothing to achieve economic justice and only further marginalizes and dehumanizes our immigrant communities.

Two days prior to the order, CAIR condemned Trump’s announcement that he planned to issue such a proclamation as “irrational and insidious.”

This advisory covers information about the administration’s latest ban on nearly all immigration to the United States. Please note that this information is subject to change.

Who is Impacted Under the Ban?

Any foreign national seeking to obtain an immigrant visa to enter the U.S. who:

This means that nearly all parents and adult children of U.S. Citizens, spouses and children of green card holders, and applicants for most employment-based immigrant visas will not be able to obtain immigrant visas to enter the U.S. for the duration of this ban.

The Ban Does Not Apply To:

Consular officers will determine if an individual has established eligibility for an exception. What Does This Mean?


The Proclamation effectively prevents nearly all parents and adult children of U.S. Citizens, spouses and children of green card holders, and applicants for most employment-based immigrant visas from being able to obtain immigrant visas to enter the U.S. for the duration of this ban.