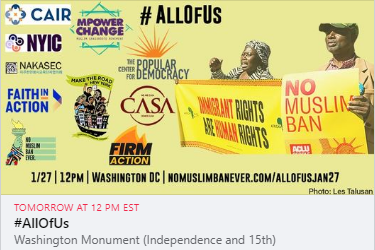 (WASHINGTON, D.C., 1/26/21) – On January 27, the Council on American-Islamic Relations (CAIR) will join immigrant and Muslim organizations taking action in front of the Washington Monument in Washington, D.C., to demonstrate a united front in addressing issues that affect #AllofUs.

The demonstration takes place within the first week of the new Biden-Harris administration and four years to the day after then-President Trump signed the Muslim Ban executive order.

From rolling back the Muslim, African, asylum, and refugee bans, to reuniting families, ending deportations, and freeing people from ICE detention, advocacy groups are calling on President Biden and Congress to pass legislation that will include #AllOfUs.

LOCATION: In front of the Washington Monument (Independence and 15th)

Follow the event online by tracking the social media hashtags:

Event organizers are supporting Rep. Pramila Jayapal’s Roadmap to Freedom resolution, to show what America should be working towards. The first thing Congress can do in 2021 is include essential workers in any COVID relief package.