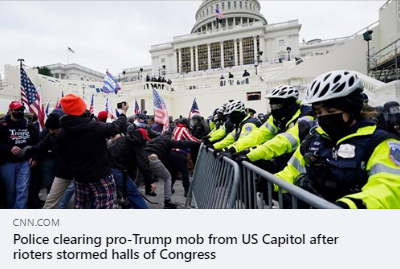 (WASHINGTON, DC – 1/6/2021) – The Council on American-Islamic Relations, the nation’s largest Muslim civil rights organization, today condemned the ongoing attack on the U.S. Capitol as an act of “violent insurrection” and called on the government to do more to protect those in harm’s way.

CAIR also encouraged both Republican and Democratic leaders to demand President Trump’s immediate resignation from office for inciting the violence and impeach him if he refuses to step down.

“Today’s attack on the U.S. Capitol represents the culmination of the far-right extremism that Donald Trump first unleashed on the campaign trail five years ago. Make no mistake: the armed Trump supporters who stormed the U.S. Capitol are violent insurrectionists.

“We pray for the safety of everyone under siege on Capitol Hill, including lawmakers and their staff. We call on our government to protect those in harm’s way, and we urge Congress to demand that President Trump, who is responsible for every act of seditious violence committed today, resign or face impeachment.”