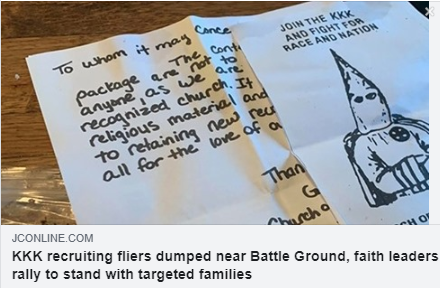 That incident occurred over the weekend and follows a similar a pattern of recruiting materials distributed in Greater Lafayette earlier this year.

CAIR also condemned the harassment of Asian-American shoppers in Wisconsin who were allegedly targeted because of their race and verbally attacked for wearing masks. The Stevens Point Police Department reported members of the Stevens Point Hmong and Asian community have seen an increase in harassment since the start of the COVID-19 pandemic.

The Washington-based civil rights organization is also joining a call for a hate crime probe of an assault against an African-American man in Des Moines, Iowa.

He noted that has reported an unprecedented spike in bigotry targeting American Muslims, immigrants and members of other minority groups since the election of Donald Trump as president.