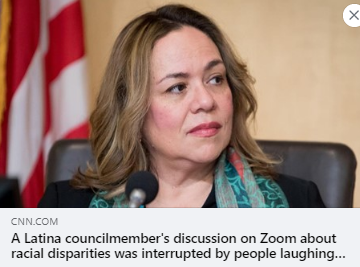 (BALTIMORE, MD, 3/5/21) – The Maryland office of the Council on American-Islamic Relations (CAIR) today condemned the mocking of Montgomery County Councilwoman Nancy Navarro’s accent during a virtual zoom meeting Tuesday on how the COVID-19 vaccine rollout in had failed communities of color in her Maryland county.

SEE: A Latina councilmember’s discussion on Zoom about racial disparities was interrupted by people laughing about her accent

The comments were made by two Montgomery County Media (MCM) employees who were heard over an unmuted microphone mocking Navarro’s pronunciation of certain words followed by laughter. MCM helps the county council with technical aspects of its meetings.

“Comments like these are inappropriate, disrespectful and contribute to toxic work environments that compound the societal burdens already shouldered by women of color breaking glass ceilings in leadership positions,” said CAIR’s Director in Maryland Zainab Chaudry. “It’s also ironic that this unacceptable incident occurred during a conversation on COVID-19 response racial disparities. We urge MCM to take swift, appropriate action, including company-wide sensitivity training and a public apology to Councilwoman Navarro by the individuals who made the comments.”

MCM CEO Nannette Hobson issued an apology an apology for the “unfortunate incident,” adding that the behavior of the male MCM trainee was “completely unacceptable” and not reflective of their culture.

The county council expressed solidarity with Councilwoman Navarro, stating that the entire body is “committed to racial equity and safe workplaces.”

Chaudry said Washington, D.C.–based CAIR and the American Muslim community are standing in solidarity with all those challenging anti-Black racism, xenophobia, Islamophobia, anti-Semitism, and white supremacy.