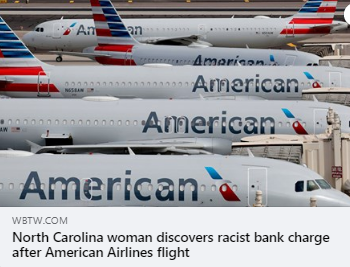 A woman in Charlotte, N.C. found a bank charge labeled “African American, African service charge” after traveling with American Airlines. She contacted the airlines and received no explanation. American Airlines issued a statement saying it was disturbed by the incident and that the issue originated with the credit card company and bank issuer.

Scott D. Rhodes, 51, of Montana faces a $9.9 million fine for recording vitriolic messages that were sent to tens of thousands of phones in at least eight states.

The messages attacked Black and Jewish politicians, threatened a journalist in Sandpoint, Idaho, targeted an Iowa community grieving the murder of a local college student, and attempted to influence the jury in a murder case against a white supremacist in Charlottesville, Va.

The FCC announced the fine in January and said Rhodes repeatedly violated the Truth in Caller ID Act by manipulating the calls to make them appear as if they came from local phone numbers.

“All those who stand against racism and white supremacy must speak out whenever members of minority communities are threatened or intimidated through hate rhetoric,” said CAIR National Communications Director Ibrahim Hooper.

Hooper said Washington-based CAIR and the American Muslim community are standing in solidarity with all those challenging anti-Black racism, Islamophobia, anti-Semitism, and white supremacy.