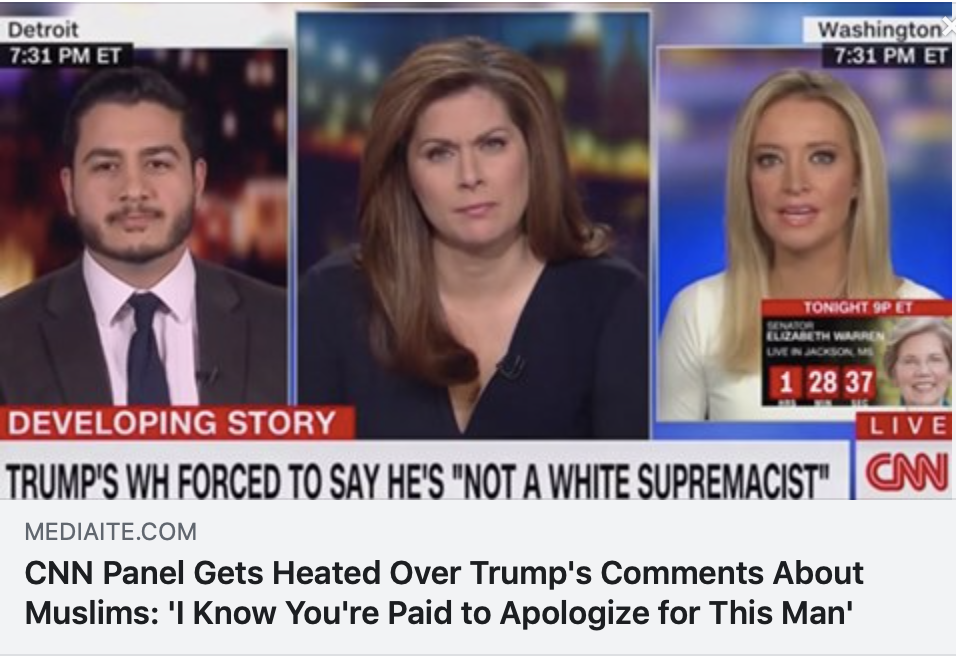 In 2014, McEnany participated in Fox Business news segment titled “How big of a threat is Islam?” during which she sat alongside white supremacist Proud Boys co-founder Gavin McInnes. McEnany repeatedly hyped the threat of extremism among Muslims, while McInnes argued that Muslims are prone to violence because of genetic defects caused by “inbreeding.”

In 2016, McEnany wrote on Twitter: “Obama endlessly preaches tolerance of Islam but never mentions this — ‘Genocide: Christian Population in Iraq Drops 80% in a Decade’.

In 2017, McEnany wrote an op-ed for The Hill decrying “far-left” German Chancellor Angela Merkel and European nations allowing Muslim refugees to enter their borders, which McEnany claimed “resulted in a culture in crisis – a culture without democratic, freedom-loving identity and constantly under murderous attack from cancers within.”

In March 2019, while working as Trump’s 2020 presidential campaign national press secretary, McEnany downplayed the president’s past anti-Muslim comment, “I think Islam hates us,” by mentioning that Trump “had many Muslim friends.”

“We are outraged, but not surprised, that President Trump has once again appointed an anti-Muslim and anti-immigrant extremist to a White House position.

“Among other things, Ms. McEnany has defended President Trump’s Islamophobia, blamed multiculturalism in Europe for terrorism, and even participated in a panel discussion titled, “How Big of a Threat is Islam?”

“Just as a person who participated in a panel discussion titled “How Big of a Threat is Judaism?” would have no business serving in our government, Ms. McEnany has no place speaking for our government.

“To be clear, Ms. McEnany’s appointment is not an oversight in vetting: the Trump Administration very clearly seeks out and welcomes appointees with a history of pedding Islamophobia, anti-immigrant bigotry, and other far-right views. She should feel right at home serving this president.”