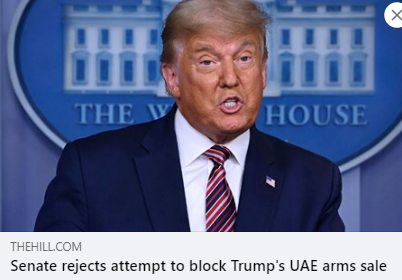 Last night, the Senate blocked two separate procedural bipartisan attempts to stop President Trump’s arms sale to the UAE, failing to win a simple majority, 46-50 and 47-49 votes, respectively. The first resolution would have banned drones and munitions sales, while the second would have prevented the sale of F-35 fighter jets. The opposing pair of resolutions to the arms sale were introduced by Senators Robert Menendez (D-NJ), Chris Murphy (D-CT) and Rand Paul (R-KY).

The arms sale is part of the larger National Defense Authorization Act, which was approved by the House of Representatives on Tuesday. Senate leader Mitch McConnell (R-KY) has said he expects the bill will pass the Senate before the end of the year.

“Our government should not sell a single bullet to the UAE, much less billions of dollars in deadly military equipment. The UAE has committed war crimes in Yemen, bolstered dictators and suppressed democracy in the broader Arab world, and smeared Americans who dare to speak up against such human rights abuses.

“Now that the Senate has failed to block the Trump administration’s corrupt and dangerous arms deal, the incoming Biden administration should support peace, democracy and human rights overseas by cancelling the sale upon taking office.”