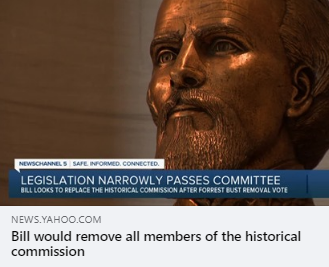 (WASHINGTON, D.C., 3/18/2021) – The Council on American-Islamic Relations (CAIR), the nation’s largest Muslim civil liberties and advocacy organization, today condemned as “pro-Confederate” a new bill in the Tennessee Senate that would replace every member of a state board that voted to remove a bust of Confederate general and early leader of the Ku Klux Klan, Nathan Bedford Forrest, from the State Capitol.

Bill would remove all members of the historical commission

Last week, CAIR welcomed a 25 to 1 vote by the Tennessee Historical Commission to remove the bust. CAIR had backed a vote to remove the statue.

“This apparently retaliatory and pro-Confederate bill sends the negative message that challenges to white supremacy and systemic anti-Black racism will not be tolerated,” said CAIR National Communications Director Ibrahim Hooper.

“Those who seek to glorify traitorous white supremacist – pro-slavery – confederate leaders and the violent terrorism of the KKK have no place in modern American politics or civil discourse,” said CAIR Director of Government Affairs Robert McCaw.