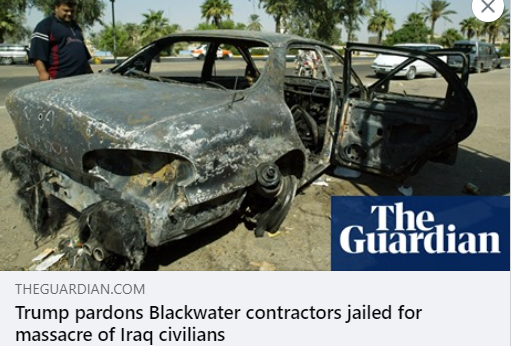 According to The Guardian, “the four pardoned guards – Paul Slough, Evan Liberty, Dustin Heard and Nicholas Slatten – were part of an armoured convoy that opened fire indiscriminately with machine-guns, grenade launchers and a sniper on a crowd of unarmed people in a square in the Iraqi capital.”

At the time of President Trump’s pardon, all four men were serving prison sentences, including a life sentence for Slatten.

“President Trump’s decision to pardon four mass murderers shows just how little respect he has for both our legal system and the sanctity of human life, especially the lives of Muslims and people of color. These Blackwater mercenaries were convicted of perpetrating one of the most infamous war crimes of the American occupation of Iraq. Pardoning them is an unconscionable act of moral insanity.”