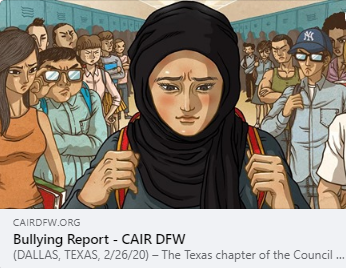 (DALLAS, TX, 2/23/2021) – TheDallas-Fort-Worth chapter of the Council on American-Islamic Relations (CAIR-DFW), a chapter of the nation’s largest Muslim civil rights and advocacy organization, today called on Allen Independent School District to remove a biased curriculum that is anti-Palestinian and apologize to Palestinian-American students and parents.

In the curriculum, there is an assignment that discusses the creation of the State of Israel. The section includes:

“This so-called school curriculum is nothing more than a propaganda piece to dehumanize Palestinians and show a skewed version of history,” said Faizan Syed, executive director of CAIR-TX DFW. “When the correct answer to a quiz question is that terrorism exists because a specific ethnic group ‘believe terrorism is justified’ you’ve successfully dehumanized that group and justified violence against them.”

The curriculum is from Jarrett Publishing Company and it titled, “Mastering the TEKS in World Geography.”

“My daughter felt targeted, bullied, humiliated, and dehumanized by her teacher and the school after being subjected to this course,” said Luay, father of a Palestinian-American Allen ISD student. “Imagine your children being taught that because they have the wrong race that they inherently believe terrorism is justified. Imagine, your children sitting in a classroom that demonizes their history, identity, and origins.”

The family is calling on Allen ISD to apologize to their daughter and drop the curriculum from their course.

In 2020, CAIR-DFW conducted the first-ever bullying survey of Muslim students in Dallas Fort-Worth and discovered that 48% of respondents experienced some form of bullying in public schools, and that 18%, almost 1 in 5 students, experienced bullying by a teacher or administrator. The use of these types of curriculums that dehumanize people of color, religious minorities and ethnicities continue to help isolate students and make them feel unwelcome in public schools.