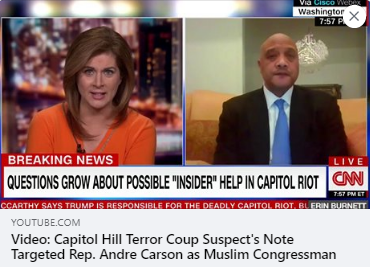 CAIR also called for increased security for Rep. Carson and for other members of Congress and officials targeted by the Jan. 6 insurrection.

Although the handwritten note does not explicitly label Carson as a “good” or “bad” guy, it indicates he is one of a small number of Muslims serving in the House. The note also included Judge David Hamilton of the United States Court of Appeals for the Seventh Circuit as a “bad guy” and described conservative media personalities as “good guys.”

Coffman was indicted in federal court Monday on 17 charges after prosecutors discovered explosive devices and firearms in his vehicle the day of the insurrection.

In a public statement, Carson said: “Sadly as a Black man and a Muslim fighting for equality, I have often been the target of death threats by domestic terrorists. For years, I have warned my colleagues about the serious threat to national security by white nationalist domestic terrorists.”

“We stand in solidarity with Representative Carson and Judge Hamilton, who were potential targets of this potential terror attack. This is not the first time Rep. Carson has received death threats because of his Muslim identity. He is a courageous leader, and we offer our full support to him in this time of national crisis caused by conspiracy theories and white supremacy. We welcome the arrest of Lonnie Coffman and hope that officials will continue to hold Capitol Hill insurrectionists accountable for their crimes.”

On January 6, CAIR condemned the attack on the U.S. Capitol as an act of “violent insurrection” and called on the government to do more to protect those in harm’s way. CAIR also encouraged both Republican and Democratic party leaders to demand President Trump’s immediate resignation from office for inciting the violence and impeach him if he refuses to step down.

The violence at the Capitol resulted in the first time Congress had been breached since the war of 1812, leaving five dead, including one Capitol Hill police officer.