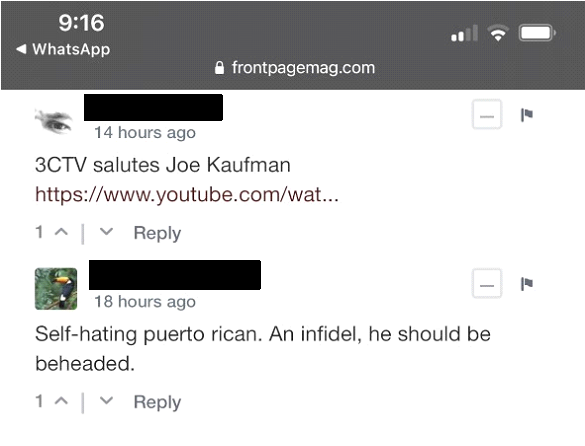 That threat targeted CAIR-Florida Communications Director Wilfredo Ruiz and is posted on the website of Islamophobe David Horowitz’s Frontpage Magazine.

The reported death threat to Ruiz reads, “Self-hating puerto rican [sic]. An infidel, he should be beheaded.”

It was posted in a comment following a hate-filled article bashing Ruiz by the defeated Republican congressional candidate Joe Kaufman.

“For many years, we have been warning our community and neighbors of the threats that white supremacists and right-wing extremists present. We are on high alert and take every threat seriously and immediately report them to the authorities,” said CAIR-Florida Programs and Outreach Director, Raniah El-Gendi. “We expect prompt action from the federal authorities in responding to this open death threat, just as we are all witnessing hundreds of extremists being prosecuted in federal courts in the wake of the January 6th coup attempt.”