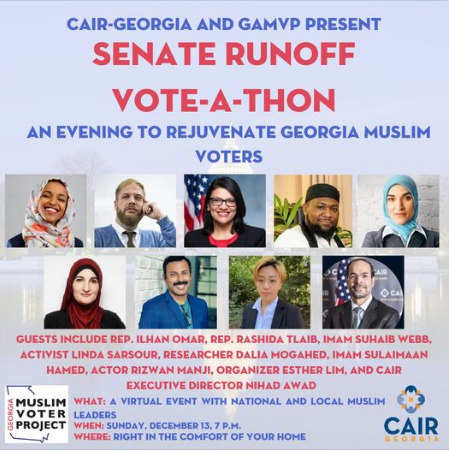 (ATLANTA, GA – 12/11/2020) – At 7 p.m. (ET) on Sunday, December 13, the Georgia chapter of the Council on American-Islamic Relations (CAIR-Georgia), in collaboration with the Georgia Muslim Voter Project (GAMVP), plans to host a virtual Vote-A-Thon event.

The virtual gathering will be held at the onset of early voting for the Georgia U.S. Senate runoffs on January 5, 2021. The goal of the Vote-a-thon is to invigorate the Georgia Muslim electorate for the runoff elections, which will determine the balance of the U.S. Senate.

CAIR-Georgia and the GAMVP staff and volunteers sent more than 100,000 texts and made more than 6,000 phone calls to Georgia Muslims in the lead up to the November General Elections to ensure that Georgia Muslim voters were civically engaged, registered to vote and educated on the issues on the ballot.

To sustain this momentum into the Senate runoffs and inspire Georgia Muslim voters, the virtual Vote-a-thon will bring together local and national American Muslim civic engagement leaders.

Guests will speak on the significance of the upcoming senate runoffs, the importance of each voter, and the gains communities stand to make by improving representation.

“On January 5th, Georgia Muslim voters not only have the power to select two senators, but to move our nation in the right direction. There is a lot at stake for us: immediate COVID-19 relief, healthcare, Islamophobia, police reform, income inequality, systemic racism, and so much more. This is exactly why we are urging Georgia Muslim voters to come out in record-breaking numbers as they did in the general elections.

“We are dedicated to doing everything we can to can to ensure that every eligible Muslim voter has the opportunity to cast their ballot in the Senate Runoff Election. The balance of the U.S. Senate will be decided by the people of Georgia.”

“During the general election, Muslim Americans established themselves as an influential voting bloc like never before. Since then, the focus of the political world has shifted to Georgia and we recognize the vital role that our communities play in the runoff races. Our virtual “Vote-A-Thon” event will highlight the call of action to our community members near and far, while also celebrating the accomplishments of Muslim Americans. We intend to build upon the present momentum to deliver in a manner that is impactful in the upcoming elections.”

Tune in to the Vote-a-thon livestream this Sunday at 7 p.m. at CAIR-Georgia’s official Facebook page: https://www.facebook.com/CAIRGA

The Georgia Muslim Voter Project is a civic engagement organization committed to improving civic participation in the Muslim community.