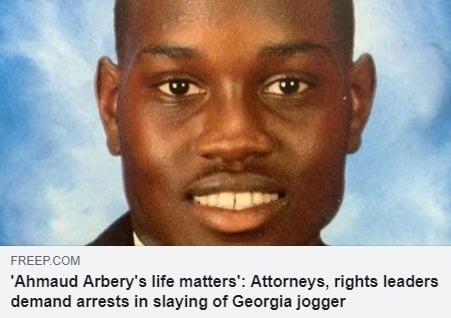 (ATLANTA, GA, 5/7/2020) —The Georgia office of the Council on American-Islamic Relations (CAIR-Georgia), a chapter of the nation’s largest Muslim civil rights and advocacy organization, today joined a nationwide call for the immediate arrest of the two men who allegedly shot unarmed jogger Ahmaud Arbery.

CAIR-Georgia also called District Attorney Tom Durden’s decision to convene a grand jury to bring charges against the two suspects “overdue,” and demanded the state prosecute the suspect to the fullest extent of the law.

“The district attorney’s announcement that he will convene a grand jury to ‘consider’ whether this racist murder warrants criminal charges is both overdue and insufficient,” said CAIR-Georgia Legal & Policy Director Murtaza Khwaja. “The state must immediately arrest the suspects, forcefully condemn their obvious crime and affirmatively fight for a grand jury indictment.”

While jogging through a Brunswick, Ga., neighborhood on Feb. 23rd, 25-year-old Arbery was followed by armed father-son duo Gregory and Travis McMichael, and shot to death. The shooting was captured on video. Neither suspect, one of whom is a former investigator with the local district attorney’s office, has been charged or arrested.

Arbery’s family and attorneys believe Arbery was a victim of racism by armed vigilantes, and have demanded the arrest of the suspects prior to the convening of the grand jury. Most Georgia courts are closed through June due to the coronavirus.

“Georgia Muslims were dismayed and infuriated but not surprised by the video showing the modern-day lynching of Ahmaud Arbery. We strongly condemn this racist act of unjustified murder, which is part of a pattern of violence rooted in the historic subjugation of African-American men and women. We join the call for the arrest of the two suspects prior to the convening of the grand jury.

“These dangerous episodes targeting the African-American community are not unique, but rather are symptomatic of the racism that instills fear and distrust within our communities. It is long past time for law enforcement to take such crimes seriously.”

“We are disappointed it took over two months and public release of the murder on video to spark prosecutorial action, but we hope that appropriate charges are levied against those responsible for killing Ahmaud Arbery. While we cannot replace the promising life that was taken from us, we can ensure justice for Ahmaud’s family.”

On Sunday, February 23, 2020, Ahmaud Arbery was on an afternoon jog in a residential neighborhood outside Brunswick, Ga.

According to the police report, Gregory McMichael, 64, and his son, Travis McMichael, 34, pursued Arbery, believing him to be a suspect behind recent break-ins in the neighborhood.

Both father and son reportedly grabbed weapons and attempted to follow Arbery in their pickup truck. The men pulled up beside Arbery and shouted at him to stop, before blocking him on the street with their truck and shooting him at least twice. Arbery died on the scene.

The incident was captured by a cell phone camera in a 36-second video and shows Arbery attempting to run around the McMichael’s truck, which had stopped in the middle of the street while chasing him, before being physically accosted by McMichael and his son.

As of today, no one has been arrested or charged in relation to the murder of Ahmaud Arbery. However, several law enforcement officials, including the two prosecutors initially assigned to oversee the case and Brunswick Judicial Circuity District Attorney Jackie Johnson, had to recuse themselves due to prior professional connections with Gregory McMichael. McMichael worked previously as an investigator for the Brunswick District Attorney’s office and as an officer for the Glynn County Police Department.