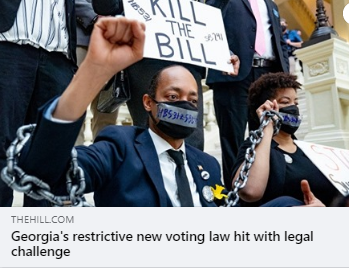 (ATLANTA, GA – 3/26/2021) — The Georgia chapter of the Council on American-Islamic Relations (CAIR-Georgia) today condemned the unjustifiable arrest of State Rep. Park Cannon, who was arrested while peacefully attempting to view Governor Kemp’s closed-door signing of voter suppression bill (SB202) and joined calls for prosecutors to immediately drop all charges against her.

In a statement, CAIR also expressed confidence that public backlash against SB202–in the form of both legal action and massive voter turnout–would ultimately defeat the state’s attempt to silence African-American voters and other people of color.

“Governor Kemp and the lawmakers who supported this blatant attempt to suppress Black voters have won the mother of all pyrrhic victories. We are confident that trying to silence voters with this ridiculous law will ensure that more Georgians will make their voices heard in both courts of law this year and at polling places next year.

“In the meantime, prosecutors must immediately announce that they will drop the ridiculous felony charges filed against Rep. Park Cannon. A state legislator’s decision to quietly knock on the governor’s door is not an arrestable offense, much less a felony. The unlawful arrest of Representative Park Cannon is yet another dark chapter in the Georgia Capitol’s long history of racist and violent suppression of Black voices. Over just the last few years we have seen two Black female lawmakers forcibly removed and arrested during an ongoing legislative session.

“The fact that law enforcement physically restrained, arrested and charged Rep. Cannon just months after failing to do the same to the white supremacists who loudly stalked the State Capitol in search of elected officials tells us everything we need to know about the double-standards that continue to plague policing.”

SB202 will impose new ID requirements on those who vote by mail, limit the use of drop boxes for absentee ballots, criminalize giving those standing in line to vote food and water, and shorten the period for runoff races. All these measures are believed to be motivated by a drive to suppress the votes of minority communities.