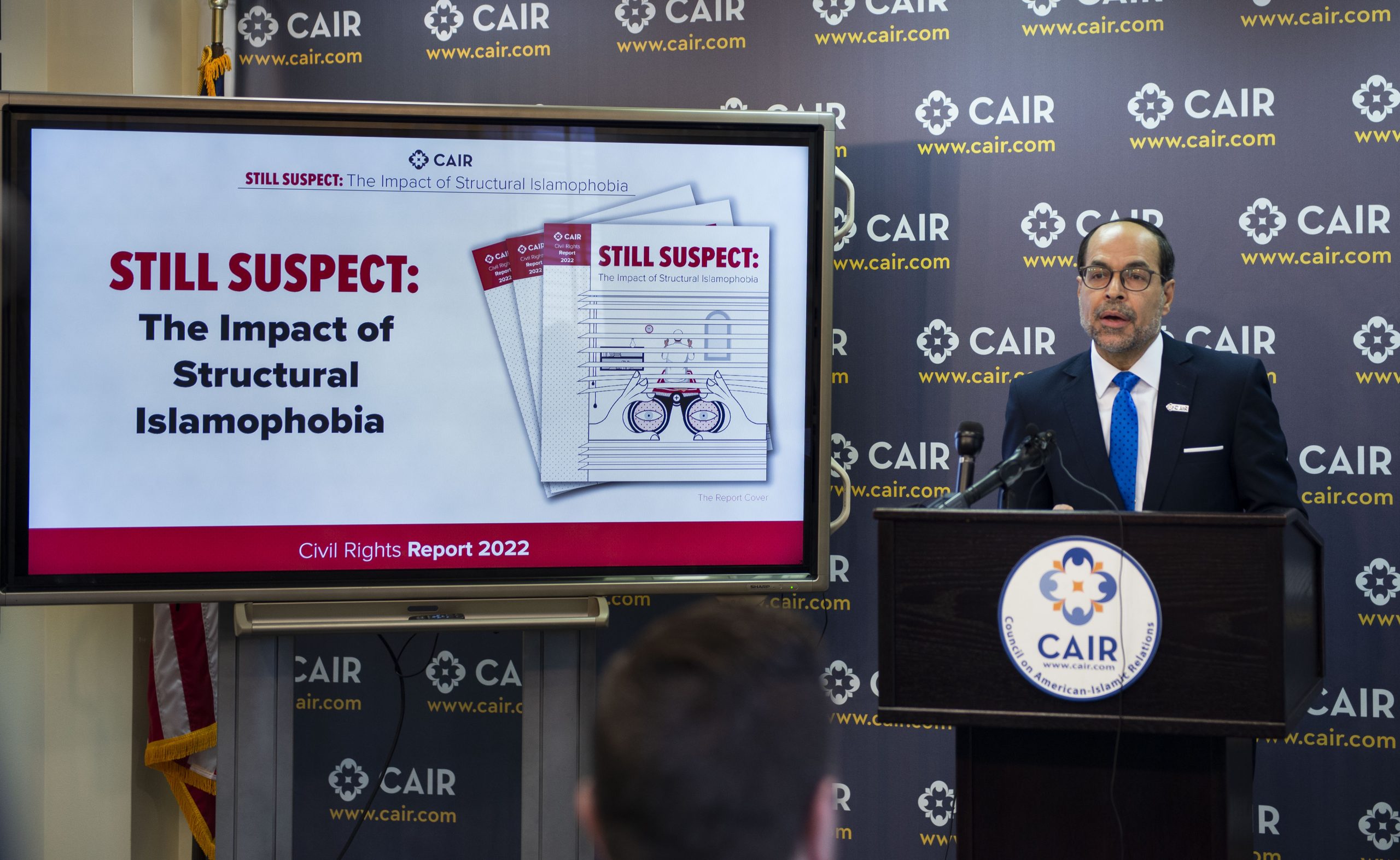 ‘Still Suspect: The Impact of Structural Islamophobia’ shows a 9% increase in complaints since 2020 and a 28% increase in hate and bias incidents as COVID-19 slowly subsided

(WASHINGTON, D.C, 4/25/2022) – The Council on American-Islamic Relations (CAIR), the nation’s largest Muslim civil rights and advocacy organization, today released its latest report on the civil rights of American Muslims, titled “Still Suspect: The Impact of Structural Islamophobia,” detailing more than 6,700 civil rights complaints the Washington, D.C., based group received in the past year.

The largest number of complaints CAIR received involved immigration and travel-related issues. The civil rights group recorded a 28% increase in hate and bias incident complaints, which reinforces the fact that many local law enforcement agencies are drastically underreporting, or completely failing to report hate crimes to the FBI’s national database.

CAIR’s new civil rights report seeks to illustrate the impacts of severe structural and interpersonal Islamophobia in the United States. For example, CAIR documented 679 complaints pertaining to law enforcement and government overreach, which included reports about the government’s terrorism watchlist, which falsely stigmatizes hundreds of thousands of people, especially Muslims, including American citizens, as “known or suspected terrorists” based on broad criteria and interpretations without any semblance of due process.

The report also catalogs a list of anti-Muslim incidents across the nation in 2021 ranging from hate crimes/bias incidents, forcible removal of hijabs, employment discrimination, mosque vandalisms, school bullying, and intimidation.

“In 2021, CAIR received its highest ever number of civil rights complaints. This is an alarming sign that Islamophobia is persistent and systemic in society and government policy. While we recognize that we’ve made progress as a society in terms of addressing social injustices, our report shows that Islamophobia continues to pose the biggest threat American Muslims are facing.

“It is essential that the federal government to address the anti-Muslim bigotry in their own policies. Until concrete steps are taken, Islamophobia will continue to impede the civil rights and freedoms of American Muslims.”

“The rising number of complaints of Islamophobia should be an alarming call for lawmakers to take the threat of anti-Muslim bigotry seriously and to demonstrate the need for continued vigilance in defense of civil rights for American Muslims and members of all other minority groups. Islamophobia is a national emergency that needs urgent federal action to ensure the safety and security of American Muslims.”

Key findings of CAIR’s report include:

3. CAIR recorded 2,823 complaints regarding immigration and travel-related issues, making it the most frequent report received for the second year in a row.

4. There was a 28% increase in hate and bias incidents which included reports of forcible removal of hijabs, harassment, vandalism, and physical assault, among other complaints.

6. We recorded a 13% increase in workplace and public accommodation discrimination complaints.

As the COVID-19 pandemic slowly subsided, CAIR continued to receive an increase in complaints of anti-Muslim bias incidents. In 2021, CAIR received a total of 6,720 complaints. The following is a breakdown of those complaints: