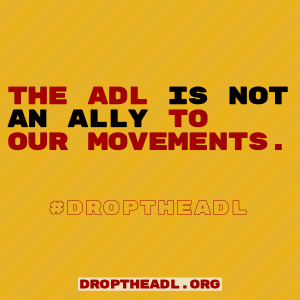 (WASHINGTON, D.C., 8/12/2020) – The Council on American-Islamic Relations (CAIR), the nation’s largest Muslim civil rights and advocacy organization, today joined a broad coalition of more than 100 civil rights and human rights advocacy organizations in denouncing the Anti-Defamation League’s “history and ongoing pattern of attacking social justice movements,” particularly those led by “immigrants, Muslims, Arabs, and other marginalized groups, while aligning itself with police, right-wing leaders, and perpetrators of state violence.”

The coalition also called on community organizations, advocacy groups and social justice workers to reconsider their working relationships with the ADL, stating:

“We cannot lift up or partner with the ADL on progressive causes, because the ADL’s credibility as a social justice organization is precisely what allows it to undermine the rights of marginalized communities, shielding it from criticism and accountability while boosting its legitimacy and resources. We cannot collaborate with the ADL without betraying our movements.”

CAIR joined the coalition in calling on allies and all those concerned with social justice to reconsider their support of the ADL and cease working with the organization in light of its ongoing anti-justice practices. It also invited allied organizations to join the coalition in its efforts to raise awareness about this issue by signing on here.

CAIR also noted the ADL’s pattern of repeatedly partnering with Islamophobic forces and disregarding Muslim sensitivities even as it condemns Islamophobia. During the controversy over the establishment of Park 51, commonly known as the “Ground Zero Mosque” controversy, the ADL baselessly and recklessly called into question the funding sources of the community center and demanded answers to the possible connections the community’s “leaders might have with groups whose ideologies stand in contradiction to our shared values.”

The ADL also called on the Islamic Center be built elsewhere. In doing so, the ADL legitimized anti-Muslim bigotry, marking itself on the wrong side of one of the most blatantly anti-Muslim moments in American history.

The ADL has also publicly attacked various American Muslim politicians organizations for speaking out in support of Palestinian human rights, conflating legitimate condemnation of the Israeli occupation with anti-Semitism.

More recently, in its committed and ongoing support of right-wing Israel policies, the ADL executive director publicly joined openly anti-Semitic and Islamophobic pastors such as Robert Jeffress and John Hagee at the opening of the US Embassy in Jerusalem, a unilateral act condemned by President Trump the international community.