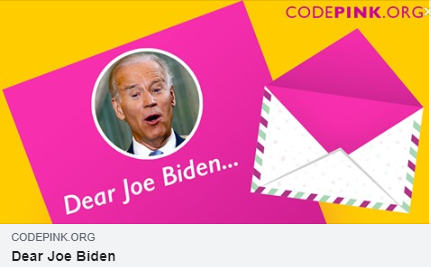 (WASHINGTON, D.C., 6/22/2020) – The Council on American-Islamic Relations (CAIR), the nation’s largest Muslim civil rights and advocacy organization, joined CODEPINK along with over 100 other organizations in urging presumptive Democratic Nominee Joe Biden and President Trump to adopt a just and principled foreign policy towards Israel and the Palestinian struggle. In a joint letter, the organizations noted policy positions that American voters are looking for in presidential candidates.

“Current U.S. positions supporting, indeed enabling, Israeli government violations are out of touch with voters. U.S. foreign policy on Israel/Palestine should be rooted in the same values and principles that are supposed to guide U.S. policy throughout the rest of the world — respecting human rights and international law, promoting the peaceful resolution of conflicts, supporting diplomacy over military intervention, and utilizing multilateralism and multilateral institutions for dispute resolution,” the groups said in the letter.

This letter comes as a recent Biden campaign statement conflates American Jews with Jewish support for Israel and brags about having increased military assistance to Israel at the end of Obama’s term. The statement also promised to continue, in violation of the First Amendment, attacks on individuals and organizations that boycott Israel for political reasons and referred to Palestinian “choices” to commit violence.

The letter is available here and is signed by the following groups: https://www.codepink.org/dearjoebiden

Alliance for Water Justice in Palestine

Chicago Committee Against War and Racism

Historians for Peace and Democracy

Lutherans for Justice in the Holy Land

National Advocacy Center of the Sisters of the Good Shepherd

Traprock Center for Peace and Justice

Unitarian Universalists for Justice in the Middle East

United for Peace and Justice

University of the Poor

Utahns for a Just Peace in the Holy Land

Vermonters for Justice in Palestine

Voices For Peace in the Middle East – Whatcom County WA

We Are Not Numbers

Women’s International League for Peace and Freedom (WILPF) US