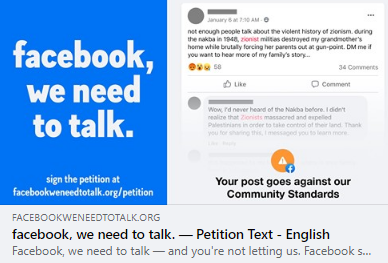 (WASHINGTON, D.C., 2/1/21) – The Council on American-Islamic Relations (CAIIR), the nation’s largest Muslim civil rights and advocacy organization, today joined the international campaign to call on Facebook to ensure any amendments to its hate speech policy keeps all people safe and connected.

Led by more than 30 organizations, the worldwide campaign, “Facebook, we need to talk” began in response to an inquiry by Facebook to assess if critical conversations that use the term “Zionist” fall within the rubric of hate speech as per Facebook’s Community Standards. Facebook may make a decision as soon as the end of February 2021.

As explained by one of the campaign’s leaders Jewish Voice for Peace: “Zionism is a political ideology and movement that emerged in the 19th century and led to the founding of the state of Israel on Palestinian land; It has been deeply contested since its conception, including within the Jewish community.”

“We are deeply concerned about Facebook’s proposed revision of its hate speech policy to consider “Zionist” as a proxy for ‘Jew’ or ‘Jewish,’” the petition reads. “The proposed policy would too easily mischaracterize conversations about Zionists — and by extension, Zionism — as inherently antisemitic, harming Facebook users and undermining efforts to dismantle real antisemitism and all forms of racism, extremism and oppression.”

This attempt to stifle conversations about Zionist political ideology and Zionist policies — both of which have real implications for Palestinian and Israeli people, as well as Jewish and Palestinian people around the world — is part of an emerging pattern of political censorship by the Israeli government and some of its supporters. The most prominent example of these efforts to shield the Israeli government from accountability is the current campaign to impose the controversial IHRA working definition of antisemitism on campuses and civil society, and to codify it in government legislation.

To read the full text of the open letter, list of signatories, and background about the campaign, visit facebookweneedtotalk.org. For interviews with petition organizers or signatories, contact Sonya E. Meyerson-Knox at sonya@jvp.org or 929-290-0317.