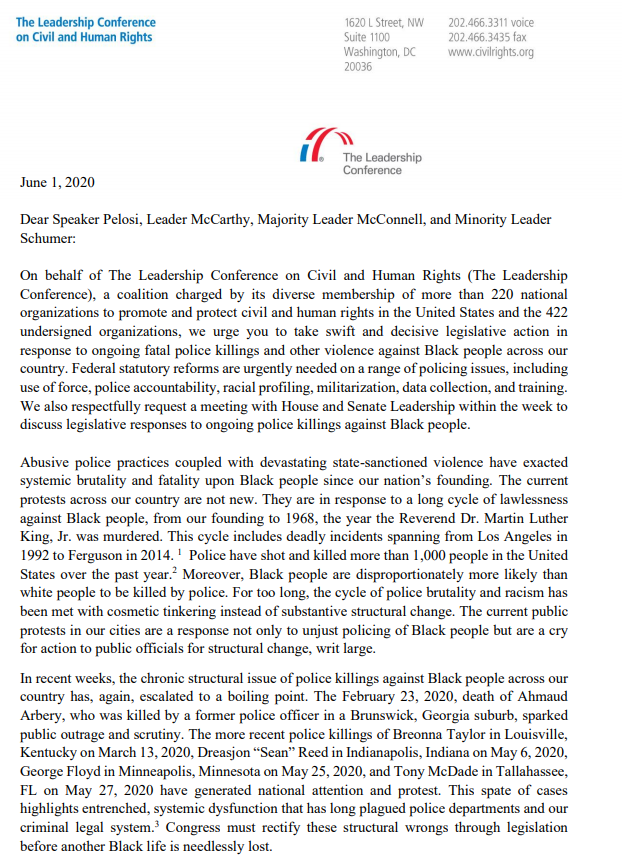 (WASHINGTON, D.C., 6/2/2020) – The Council on American-Islamic Relations (CAIR), the nation’s largest Muslim civil rights and advocacy organization, has joined the Leadership Conference on Civil and Human Rights along with 400 other civil rights organizations in a letter calling on congressional leadership to swiftly rectify the legacy of white supremacy and anti-black racism that has led to police violence against Black people across our country.

The letter states in part: “Now is the time for Congress to pass meaningful police reform legislation. While we appreciate hearings and resolutions, we need comprehensive measures to happen. We need Congress to truly step up to the plate and protect Black communities from the systemic perils of over policing, police brutality, misconduct, and harassment, and end the impunity in which officers operate in taking the lives of Black people. It is your moral and ethical duty to ensure Black people and communities are free from the harm and threats from law enforcement and to curtail state sanctioned police violence and militarized police responses.”

The federal reforms addressed in the letter include:

The letter is signed by CAIR, the Leadership Conference on Civil and Human Rights and following groups:

All Voting is Local, Georgia

Alliance of Nurses for Healthy Environments

American Association of People with Disabilities

Beauty after the Bars

Bread for the World

Campaign for the Fair Sentencing of Youth

Center on Race, Inequality, and the Law at NYU School of Law

Congregation of Our Lady of Charity of the Good Shepherd, U.S. Provinces

Exp Realty,LLC – One eXp Co-Chair for Diversity and Inclusion

In Our Own Voice: National Black Women’s Reproductive Justice Agenda

League of Women Voters of the United States

National Advocacy Center of the Sisters of the Good Shepherd

National Center for Children in Poverty

National Coalition for the Homeless

Not in Our Town

People For the American Way

Sisters of Mercy of the Americas, Justice Team

The Arc of the United States

The Center for Family Justice, Inc.

The Committee for Hispanic Children and Families

The Gathering for Justice

The Leadership Conference on Civil and Human Rights

The Ounce of Prevention Fund

The United Methodist Church – General Board of Church and Society

Ujima Inc: The National Center on Violence Against Women in the Black Community

WE GOT US NOW