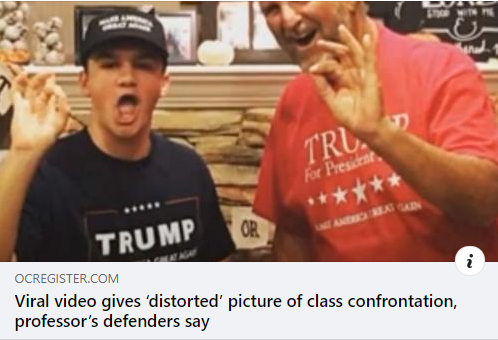 (LOS ANGELES, CA – 8/5/2021) – The Greater Los Angeles Area office of the Council on American-Islamic Relations (CAIR-LA) today called on Cypress College to allow Professor Faryha Salim to return to the classroom and to issue a public apology and statement of support of her.  Cypress College must directly and publicly address the suppression of Professor Salim’s academic freedom and the xenophobic, racist, and Islamophobic hate to which Professor Salim has been subjected.

Professor Salim was unfairly placed on leave effective April 30, 2021 and removed from teaching duties as a result of an out-of-context incident with a student that went “viral.”

On April 28, 2021, Professor Salim challenged the student’s unwavering support of police given the number of incidents in which police have committed crimes or used unreasonable force without accountability. This was done as a part of an exercise on persuasive presentations as part of a communications class.

“It is shocking that Cypress College would take such actions against Professor Salim and capitulate to the hateful targeted attacks,” said Amr Shabaik, Civil Rights Managing Attorney of CAIR-LA. “Professor Salim has been made to endure threats; racist, Islamophobic and xenophobic attacks; the revealing of personal contact information online; and the tarnishing of their reputation. Immediately after the out-of-context video went viral, the College should have come out in support of Professor Salim and academic freedom and provided a clear statement on the context of the viral video.”

On May 21, 2021, CAIR-LA sent a letter to the College asking them to remedy the situation, make Professor Salim whole, and issue a public condemnation of xenophobia, racism, Islamophobia, white supremacy, and other forms of hate.