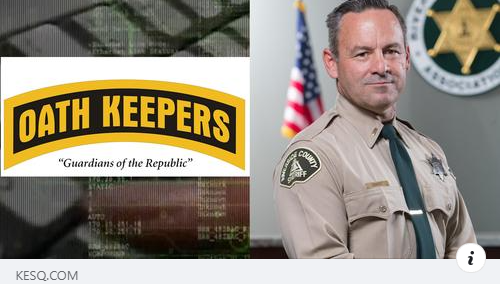 (LOS ANGELES, CA – 10/06/2021) -The Los Angeles chapter of the Council on American-Islamic Relations (CAIR-LA), the nation’s largest Muslim civil rights organization, today called for the resignation of Riverside County Sheriff Chad Bianco over revelations that he is involved with and defends the far-right militia group “Oath Keepers.”

Bianco is one of hundreds of law enforcement officials named on a list of leaked membership records for the group, which the FBI calls “an anti-government militia.” The Oath Keepers are most notably known for some members’ involvement in the Jan. 6 insurrection at the nation’s capital.

According to reports from several media outlets, including KESQ, Bianco stated that he paid for a one-year membership in 2014: “What happened on Jan. 6 by a few people, should have nothing to do with something I did in 2014 with an organization that supports the constitution. I, along with every law enforcement officer, politician including the president, swear an oath to uphold the constitution against all enemies. Only in today’s politically polarized environment, does being a proud American who supports the constitution make you a right-wing extremist.”

“It is unacceptable and disturbing that Sheriff Chad Bianco is defending his association with the Oath Keepers, a group that is well-known for its involvement with rallies promoting white supremacy, anti-Black and anti-Muslim rhetoric, as well as its recent involvement with the Jan. 6 insurrection. All of these instances make it difficult to trust a public servant who has the responsibility of protecting people, yet defends and supports a group that has endangered the public and our constitution. Any candidate that is associated with the Oath Keepers or any similar organization should be disqualified from serving Riverside County residents.”

Nawabi also urged community members to report any incidents of bias or discrimination to CAIR-LA’s Civil Rights Department at 714-776-1177 or by filing a report online.