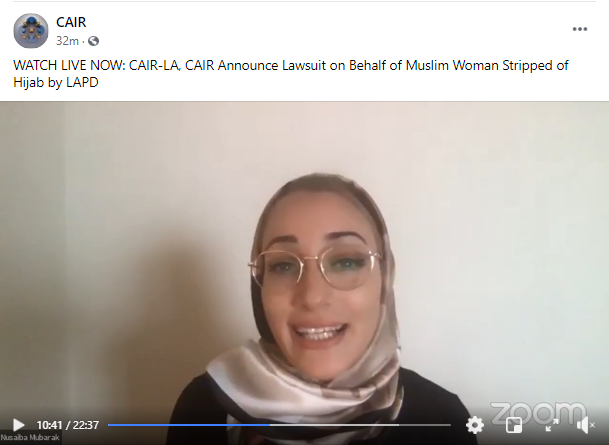 (WASHINGTON, D.C., 9/17/2020) — The Greater Los Angeles Area office of the Council on American-Islamic Relations (CAIR-LA) and the CAIR National Legal Defense Fund today announced the filing of a lawsuit in federal court on behalf of a Muslim woman who had her religious head scarf (hijab) forcibly removed by Los Angeles Police Department officers.

LAPD officers forcibly handcuffed, searched and removed the hijab of Nusaiba Mubarak on September 17, 2019, at a police commission meeting at the Los Angeles Police Department Headquarters in Los Angeles. The meeting was convened to discuss an LAPD officer fatally shooting Albert Ramon Dorsey on October 29, 2018 at a 24-Hour Fitness Gym in Hollywood, California.

While she stood in line at the meeting to provide a public comment, police officers were called to remove the previous speaker who had exceeded his time limit. Mubarak was standing in a multiple-persons-wide walkway perpendicular to the aisles where the prior speaker was seated when a male officer grabbed Mubarak by the arms and forced her out of the way.

Mubarak was then subjected to an intrusive physical search where her hijab was removed without her consent as she stood handcuffed and incapacitated. During the search and the hijab removal, an additional male officer remained in the room. Mubarak immediately informed the officer that her headscarf was worn for religious purposes and that it should not be removed in the presence of males and requested her hijab be replaced.

The female officer dismissively replied, “Oh, just wait a minute,” while she continued to fill out paperwork for several additional minutes. During this time, Mubarak remained handcuffed, exposed, and humiliated.

Although Mubarak had attended the public hearing to speak out against police misconduct, she found herself subjected to the same behavior she intended to protest. The experience inflicted upon Mubarak a degrading indignity she will remember for the rest of her life.

“While municipalities across the country and throughout Southern California have recognized the sanctity and legally protected status of a religious head-covering, there are still municipalities without policies that prevent the discrimination this lawsuit seeks to expose.

“It is shocking that the Los Angeles Police Department, which serves thousands of Muslim women, would permit its officers to strip a Muslim woman of her religious head covering, which violates her Constitutional rights.”

“It is ironic that Nusaiba became herself a victim of excessive force during a public hearing about this LAPD officers shooting and killing Albert Ramon Dorsey.”

“We stand with Nusaiba as she fights for justice for herself, our community, and all Americans.”

In a statement, Nusaiba Mubarak said:

“I decided to share my story, and along with CAIR, file this lawsuit against the LAPD because I want to protect the rights of freedom of religion of every single woman in America. No one should experience such a gross violation of her constitutional rights.

“I want to prevent any other person from being humiliated and disgraced the way I was. I want to make sure the LAPD is held accountable for their actions, and that no woman’s hijab is forcibly removed without her consent again.”

In 2018, CAIR-LA filed a federal lawsuit on behalf of a Muslim woman who had her hijab forcibly removed by deputies of the Ventura County Sheriff’s Department. Later that year, CAIR-LA, in conjunction with Erin Darling Law, reached a settlement with Ventura County and the county’s Sheriff’s Office, which included the county paying $75,000 in damages and a new accommodation policy for religious head coverings in the Sheriff’s Office written policy manual. The policy manual update formalized the process by which accommodations are granted for religious head coverings.

In 2016, CAIR-LA filed a federal lawsuit on behalf of a Muslim woman who had her hijab forcibly removed by a male officer of the Long Beach Police Department (LBPD). After the suit was filed, the LBPD amended its policy in November 2017 to accommodate religious head coverings for persons in custody. Long Beach joined neighboring jurisdictions of San Bernardino County and Orange County, which both adopted policies protecting religious headwear in detention following similar lawsuits that settled in 2008 and 2013 respectively.

CAIR offers a booklet, called “A Law Enforcement Official’s Guide to the Muslim Community,” which outlines basic information about Islamic beliefs that are relevant to law enforcement.  It also covers issues such as the rights of Muslim law enforcement officers, religiously sensitive techniques for body searches, proper etiquette for entering Muslim homes, and advice on outreach to the Islamic community.

SEE: A Law Enforcement Official’s Guide to the Muslim Community