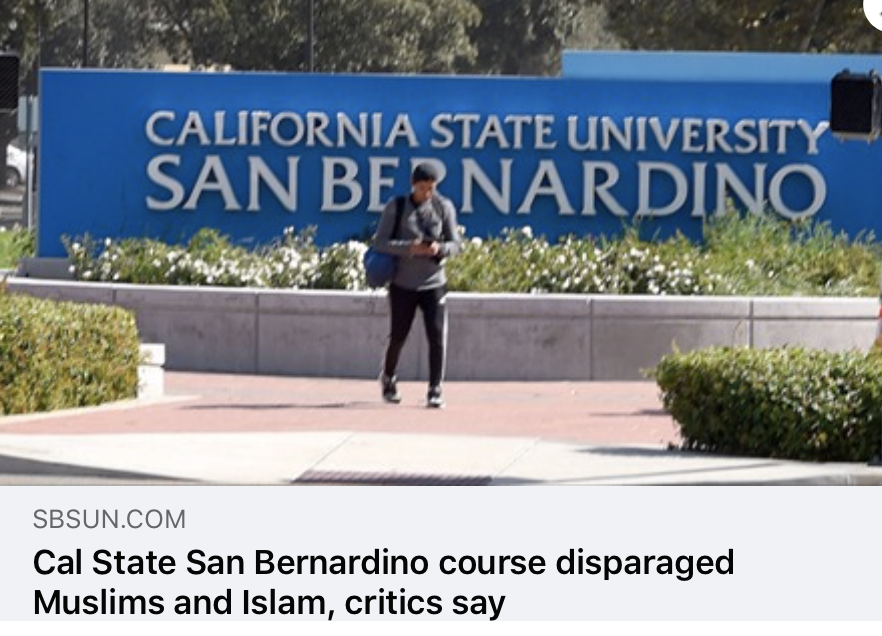 (LOS ANGELES, CA – 8/5/2020) – The Greater Los Angeles Area office of the Council on American-Islamic Relations (CAIR-LA) today welcomed Cal State San Bernardino’s (CSUSB) pledge that courses like an anti-Islam class canceled in February at the Palm Desert campus will not be offered in the future.

The course, titled “History of Islam: Mohammed to ISIS,” was taught by Edward Kodinsky on the university’s campus through Osher Lifelong Learning Institute (OLLI). According to his biography, Kodinsky earned degrees in the State Scientific and Research Institute of Metal Processing.

CSUSB canceled the course on Tuesday, Feb. 25 after CAIR-LA informed CSUSB of the Islamophobic and non-academic nature of the course.

In a slideshow from one of his lectures, Kodinsky falsely claimed Arabs are not a moral people and that ‘lying and cheating’ are commonplace among Arabs because Arabs are all about ‘exploiting possibilities.’

“The slides Edward Kodinsky used depicted Muslims as violent and without morals, and promoted the most racist tropes one can imagine. This was not a class, but a hate fest. It was a deliberate attempt to indoctrinate students with his agenda of hate.

“We are pleased the university canceled the class and has instituted new policies to review third-party courses taught on its campuses in order to prevent such incidents from occurring in the future.”

Ayloush said after a recent assessment of the incident, the university has committed to:

• Ensuring any course taught by any third party is now reviewed by the Dean of the Palm Desert Campus.

• A second review of courses that purport to be academic. The review of academic courses will be conducted with the Dean in consultation with the appropriate Department Chair regarding the course to make sure it meets academic standards.

In a statement, the university said:

“CSUSB is committed to making sure that all members of its community flourish in a diverse environment built upon inclusion, equal access and a sense of belonging. To that end, CSUSB has dedicated significant resources to recruiting a diverse community of students, faculty and staff.

“As part of its mission of diversity, equity and inclusion, CSUSB is home to a thriving community of Muslim and Middle Eastern students, faculty, administrators and staff. . .