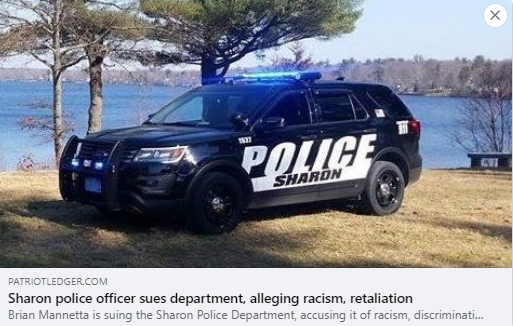 (BOSTON, MA, 7/6/21) The Massachusetts chapter of the Council on American-Islamic Relations (CAIR-MA), the largest Muslim advocacy and civil rights organization in the United States, today expressed concern over and called for an investigation into an alleged anti-Muslim statement made by Sharon, MA Chief of Police Donald Brewer.

In a lawsuit against the department alleging a pattern of racist and discriminatory treatment, Sergeant Brian Mannetta claims that, when announcing that the police would be performing extra security checks at the school attached to the Islamic Center of New England mosque in Sharon, then-Lieutenant Brewer stated, “While you’re there, tell them they should tell their kids not to make pipe bombs” (Complaint, paragraph 11).

“Even though Chief Brewer is alleged to have made this statement before being tapped for his current position, it is still extremely troubling to the Sharon Muslim community,” said Barbara J. Dougan, Esq., Civil Rights Director of CAIR-Massachusetts.  “Derogatory remarks by a superior officer about any segment of the community would send a troubling message to the department’s officers and could markedly impact the officers’ treatment toward those whom they serve.”

She added: “It is critical for Chief Brewer to immediately provide clarity to the Muslim community – and, indeed, the community at large – that the Sharon Police Department is committed to the mission statement found on its website: ‘recognizing both our diversity and those ideals we have in common.’  We request an independent probe to determine whether the alleged comments are reflective of larger patterns of anti-Muslim animus within the Sharon Police Department.”