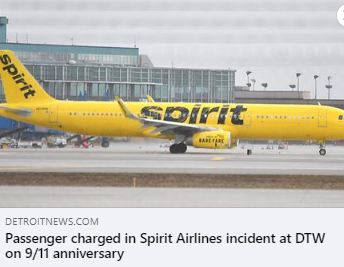 (CANTON, MI, 9/17/2021) — The Michigan chapter of the Council on American-Islamic Relations (CAIR-MI), a local chapter of the nation’s largest Muslim civil rights and advocacy organization, today welcomed the charging of Alexandra Lynn Far by Wayne County Prosecutor’s office for her alleged assault of a Muslim woman, Aicha Toure, Sept. 11 on Spirit Airlines.

On the 20th Anniversary of the September 11, 2001, attacks, Toure was traveling from Atlanta, Ga., to Detroit Metro Airport when she allegedly intervened when Alexandra Far berated an older woman who appeared to be of South Asian descent. Toure’s intervention resulted in her allegedly being called a “Muslim Terrorist” before being struck with a closed fist. At the time, CAIR-MI called on Wayne County Prosecutor’s office to bring charges of ethnic intimidation for the apparent Islamophobic assault.

Wayne County Prosecutor’s office announced yesterday that they were charging Far with three misdemeanor counts including Ethnic Intimidation for her actions. Michigan’s Ethnic Intimidation Statute makes it a high misdemeanor punishable by up to two years in prison for assaulting, harassing, or intimidating someone because of their religion.

“CAIR-MI is pleased that the prosecutor’s office has taken the alleged targeting of Muslims in Detroit for violent Islamophobic attacks seriously,” said CAIR-MI Staff Attorney, Amy V. Doukoure. “Charging Ms. Far under Michigan’s Ethnic Intimidation Statute sends a strong signal to Michigan’s Muslim community that hatred and intolerance against them is unacceptable and will be prosecuted to the full extent of the law.”