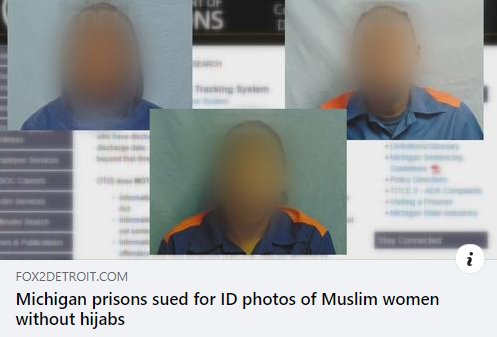 (CANTON, MI, 8/19/2021) – The Michigan chapter of Council on American Islamic Relations (CAIR-MI), a chapter of the nation’s largest Muslim civil rights and advocacy organization, today welcomed Judge Borman’s decision denying the director of the Michigan Department of Corrections (MDOC) Heidi Washington’s Motion to Dismiss her from the lawsuit filed on behalf of several Muslim and Moorish Science Temple of America women who have been forced to remove their hijab (Islamic head scarves) for identification photos that are then posted publicly on MDOC’s website.

In December 2020, a lawsuit was filed by several women at the Women’s Huron Valley Correctional Facility alleging that MDOC’s policy requiring them to remove their hijab for identification photos that are then placed on identification cards and a public website operated by MDOC  is a violation of their First Amendment Rights and the Religious Land Use and Institutionalized Persons Act (RLUIPA).

Defendant Heidi Washington who is responsible for creation and implementation of the MDOC’s photograph policy filed a motion to dismiss her from the lawsuit alleging that despite her personal involvement in the policy she should not be held liable for the Constitutional violation of the women. Judge Borman, of the Federal Eastern District of Michigan, issued his Opinion and Order today denying Defendant Washington’s request to remove her as a Defendant from the lawsuit leaving Defendant Washington to face personal liability for her actions.

“The forceful removal of a Muslim woman’s hijab for a photograph that is shared online is a clear violation of the First Amendment’s Free Exercise Clause,” said Amy V. Doukoure, CAIR-MI Staff attorney. “We are pleased that Judge Borman refused to let those who insist on continuing to violate the religious rights of Muslims, especially those most vulnerable like our incarcerated brothers and sisters, escape liability without having to answer for the violation.”

You are receiving this email due to your interest selection from commercial media databases. If you would like join CAIR’s media list, please sign up here: https://action.cair.com/a/newsletters  — For more information, email: info@cair.com, CC ihooper@cair.com