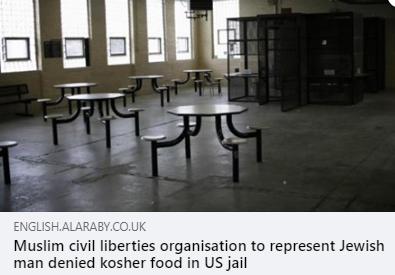 (CANTON, MI, 12/11/2020) – The Michigan chapter of Council on American-Islamic Relations (CAIR-MI), the local chapter of the nation’s largest Muslim civil rights and advocacy organization, today welcomed a settlement in a case in which CAIR-MI represented a Jewish individual against Macomb County for denial of a Kosher religious meal accommodation in 2017.

CAIR-MI began representing Brandon Resch in his case against Macomb County Jail in July 2020 after learning that he was denied Kosher meals while housed at the jail. The jail required detainees to obtain a letter of good standing from a religious institution in order to obtain an accommodation for religious meal restrictions, including Kosher and Halal meals. This policy created a substantial burden in the religious practices of both Jewish and Muslim individuals who would be forced to choose between following their religious beliefs or going hungry.

CAIR-MI today announced that it has reached a settlement in the case for Brandon Resch, which resulted in CAIR-MI working with Macomb County to completely re-write the jail’s policy as it relates to individuals requesting religious meal accommodations making it easier for Jewish and Muslim detainees to receive Kosher and Halal meal accommodations by removing any requirement to have someone vouch for the piety of the detainee.

“The Constitution affords everyone the right to practice their religion without interference from the government. Individuals do not lose that fundamental right simply because they are being housed in a correctional facility,” said CAIR-MI Staff Attorney Amy V. Doukoure. “CAIR-MI will defend the religious rights of all persons regardless of denomination because in doing so, we are also guaranteeing the rights of Muslims.”

Curtailment of religious rights for detained and incarcerated individuals is a serious issue facing Muslims being housed in jails and prisons.

In 2020, in addition to this case against Macomb County Jail, CAIR-MI has either joined in or filed lawsuits against the Michigan Department of Corrections and the City of Detroit for women who have had their hijab forcibly removed for a public booking photo and men who are not allowed to wear their kufi while being housed in MDOC despite Jewish inmates being allowed to wear a yarmulke and baseball caps being permissible. CAIR-MI’s Safe Spaces Program conducted an Islamophobia and Implicit Bias training with the Sterling Heights Police Department and, in addition, assisted Genesee County Jail in writing a policy that would, for the first time, permit Muslim women to wear hijab (Muslim religious head covering) while being housed in the Jail.

“Justice for our clients happens in and out of the courtroom,” said Zienab Fahs Director of Safe Spaces. “Amendments in policy and mandated trainings prevent further instances of threatening religious freedoms from occurring and gives the space for law enforcement and governmental agencies to accurately learn about, ask about, and understand Islam and Muslims.”