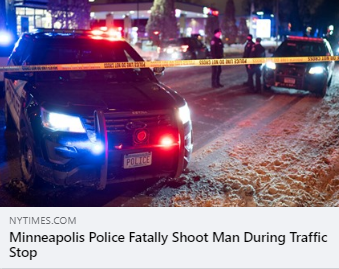 (MINNEAPOLIS, MN, 12/31/20) – The Minnesota chapter of the Council on American-Islamic Relations (CAIR-MN) today called for an independent and transparent investigation of an incident in which the Minneapolis Police fatally shot a Somali during a traffic stop.

[MEDIA ADVISORY: CAIR-MN will be hosting a community vigil tonight Thursday 12/31 at 5 p.m. on E 36th ST and Cedar Ave.  Click here for information on Rally. Support the Family by going to this Gofundme Link]

A Minneapolis police officer killed a man during a traffic stop on Wednesday evening, the police chief said, the first killing by a member of the department since George Floyd’s death in May. The community quickly gathered on the scene to demand a transparent investigation.

“The video released today is inclusive and warrants an independent and transparent investigation. We must see all the videos and we demand justice for Dolal Idd,” said CAIR-MN Executive Director Jaylani Hussein. Hussein added we also are outraged after learning the terrifying home raid that could have resulted in tragedy.

Senator-Elect Omar Fateh said, “It is deeply disturbing any time a community member is killed by the police. According to the family of the deceased, the police entered their home late last night. They were handcuffed and had their house searched, and they were only informed of their son and brother’s death at the end of this encounter. This type of treatment for a bereaved family is inhumane and unconscionable. The police have lost the public trust, especially within BIPOC communities. My heart aches for the family of Dolal Idd.”