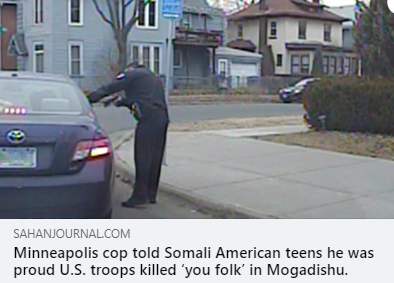 (MINNEAPOLIS, MN, 12/17/20) — The Minnesota chapter of the Council on American-Islamic Relations (CAIR-MN) today called on the mayor of Minneapolis and other officials to open a new investigation into an incident in 2015 involving Somali youth after revelations that a Minneapolis police officer told Somali-American teens he was proud that American troops killed “you folk” during Black Hawk Down.

Sahan Journal reports that it “has obtained documents and recordings through a public records lawsuit against the city, which reveals for the first time that the Minneapolis officer subjected the teens to a litany of racist comments, within earshot of other officers and a police supervisor. No record has emerged to suggest any of these other officers intervened or reported their colleague to department leadership.”

SEE: A Minneapolis cop told Somali American teens he was proud U.S. troops killed ‘you folk’ during Black Hawk Down. The police union fought to keep his job anyway.

“We are saddened to learn the shocking nature of this incident and the failure of the previous investigation to discipline other officers who are involved.

“CAIR-Minnesota demands a new investigation into this incident as well as new disciplinary charges for all officers involved who were not disciplined in the previous investigation. Those officers who stood by and allowed the conduct of this officer showed clearly that this type of behavior is welcomed, practiced, and protected.”

In January of this year, CAIR-MN announced it reached a settlement with the Minneapolis Park Police over a 2018 incident in which officers handcuffed four Somali teenagers.