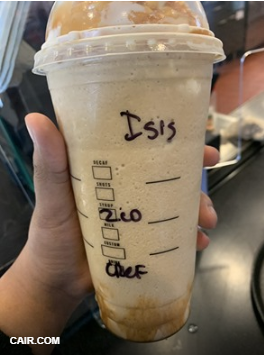 (MINNEAPOLIS, MN – July 5,2020) — On Monday, July 6, the Minnesota chapter of the Council on American-Islamic Relations (CAIR-MN) will hold a news conference condemning an Islamophobic incident targeting a Muslim woman at the St. Paul-Midway Starbucks/Target location and calling for the termination of the employees involved.

WHAT: Press Conference with Muslim Customer and CAIR-MN representative

According to the Muslim customer, she and a friend entered Saint Paul – Midway Target Starbucks on the evening of July 1 to order beverages. She reportedly told the employee her first name when asked, but before she finished giving her name, the employee wrote something on a cup and hid the cup from view.

When the Muslim woman received her beverage, she found that the employee had written “ISIS” in capital letters on the cup. [NOTE: ISIS is a commonly-known acronym for a terrorist organization that has received extensive and widespread news media coverage.]

After noticing the writing on the cup, she asked the employee why “ISIS” was written on the cup. The employee claimed that she had not heard her name correctly. Later, a supervisor told the Muslim customer that “mistakes” sometimes happen with customers’ names, suggesting that this is not the first incident in which a customer felt targeted or harassed by a Target employee’s conduct when receiving their coffee order.