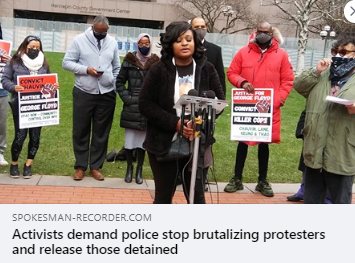 (MINNEAPOLIS, MN – 4/15/2021) — The Minnesota chapter of the Council on American-Islamic Relations (CAIR-MN) today called on Commissioner Lucero and the Minnesota Department of Human Rights (MDHR) to file a charge against and open an investigation into the Brooklyn Center Police Department’s (BCPD) training, policies, procedures, and practices relating to use of force protocols following the tragic killing of 20-year-old Daunte Wright.

An investigation by the MDHR into the BCPD’s policies, procedures and practices over the past 10 years would determine if the BCDP has engaged in systemic discriminatory practices towards people of color and ensure any such practices are stopped.

“An investigation into the Brooklyn Center Police Department by the Minnesota Department of Human Rights is a necessary step toward repairing broken systems and to rebuilding the relationships between the community and those who serve them. Opening such an investigation is well within the Commissioner’s power as demonstrated by the investigation launched by the MDHR less than a year ago following the murder of George Floyd in Minneapolis.”

“CAIR-Minnesota has received reports from community members of harassment and racial profiling by the Brooklyn Center Police Department, including reports of such behavior by some of the same officers seen in video released of the traffic stop that preceded Daunte Wright’s senseless killing. These reports demonstrate that concerns about racism and discriminatory policing by the Brooklyn Center Police Department are not new and are not limited to this most recent tragic incident. An investigation by the Minnesota Department of Human Rights is necessary to uncover the extent of such incidents in the past and to ensure that such incidents do not continue for even one more day.”