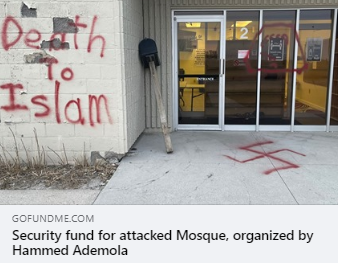 (MINNEAPOLIS, MN, 5/3/21) – The Minnesota chapter of the Council on American-Islamic Relations (CAIR-MN) today joined the Moorhead Muslim community in forgiving the individual who allegedly vandalized a local mosque with hate graffiti and invited him – along with his family – to visit the mosque after the month-long fast of Ramadan concludes later this month.

The Moorhead-Fargo Islamic Community Center said it forgives 22-year-old Benjamin Enderle, the man who was arrested for allegedly spray-painting hate messages on the mosque. The community also invited the 22-year-old to visit the mosque with his family after Ramadan.

“It is the month of Ramadan, and forgiveness is the message we learn from the day we step into this world. With that in mind, we at MFICC would like to let the gentlemen who allegedly put graffiti and hate messages on our mosque know that we forgive him from the deepest part of our hearts. Instead of coming in the dark, please come in light and talk with us. I guarantee you we will find lots of common ground and we will become good friends. Love is much more powerful than hate.”

“Islam’s Prophet Muhammad (peace be upon him) said; “The merciful will be shown mercy by the Most Merciful. Be merciful to those on earth and the One in the heavens will have mercy on you.” al-Tirmidhi

“The forgiveness offered by the Moorhead-Fargo Islamic Community Center to the young man who allegedly committed this heinous crime is a blessing during the month of Ramadan, during which we as a community are seeking forgiveness from our Creator. While the hate crime sent a chilling message to our community, we welcome the opportunity to heal and move forward. We applaud the leadership of the Moorhead Fargo Islamic Community Center and the rest of the community, and we thank the wider community that came forward to support the mosque immediately after the attack.”