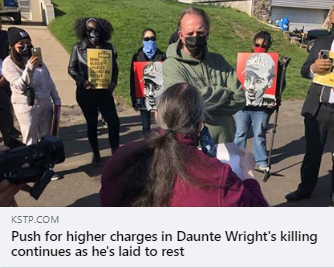 (MINNEAPOLIS, MN, 4/23/21) – Today, the Minnesota chapter of the Council on American-Islamic Relations (CAIR-MN) will join a coalition of community organizations in demanding Washington County Attorney Pete Orput to step down and Gov. Waltz to appoint a special prosecutor.

On the heels of Derek Chauvin being found guilty of 2nd-degree murder, 3rd-degree murder, and manslaughter, activists push for stronger charges to be brought against Officer Kimberly Potter- the officer who killed Daunte Wright.

Executive Director of CAIR Minnesota Jaylani Hussein said, “In prosecuting police officers county prosecutors have been one of the largest barriers of affective accountability when officers killed black and brown bodies. That is why we are asking the governor to assign an attorney general and a special prosecutor. We have learned our lessons from the George Floyd case when the county prosecutor from Hennepin County refuses to bring forth murder charges.”

Civil Rights Attorney Nekima Levy Armstrong said, “It is evident that Washington County Attorney Pete Orput is not qualified and not prepare to make an appropriate charging decision in the case of Kim potter for the shooting of Daunt Wright. He has a record of representing the police association and. has not once in his entire career has never charged a police officer with murder for killing a civilian.” She added,” if Daunte were a young white man and the Police officer who killed him was a black woman, there is no doubt in my mind, Pete Orput would charger that black woman to the fullest extent of the law. Racial bias and a pro-police stance are key factors in Pete Orput’s faulty decision-making.”