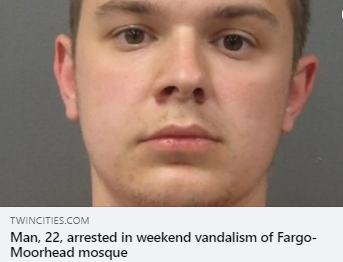 (MINNEAPOLIS, MN, 4/28/21) – The Minnesota chapter of the Council on American-Islamic Relations (CAIR-MN) today welcomed the arrest of a suspect who allegedly sprayed anti-Muslim, neo-Nazi and racist graffiti sprayed on a mosque in Moorhead, Minn.

Benjamin Enderle, 22, was taken into custody on Tuesday night. Felony charges of harassment and criminal damage to property with enhancements due to “hate-related acts” are being recommended by authorities.

CAIR-MN had called for that incident to be investigated as a hate crime and called on state lawmakers to pass a bill updating Minnesota’s hate crime legislation.

UN condemns mosque attack in US’ Minnesota amid Ramadan

“We welcome the arrest in this troubling case, thank the investigators involved, and hope the swift apprehension of the alleged perpetrator sends a strong message to others who would contemplate engaging in bias-motivated crimes,” said CAIR-MN Executive Director Jaylani Hussein.

He noted that earlier this week, CAIR release its latest national report on the civil rights of American Muslims, titled “Resilience in the Face of Hate.”