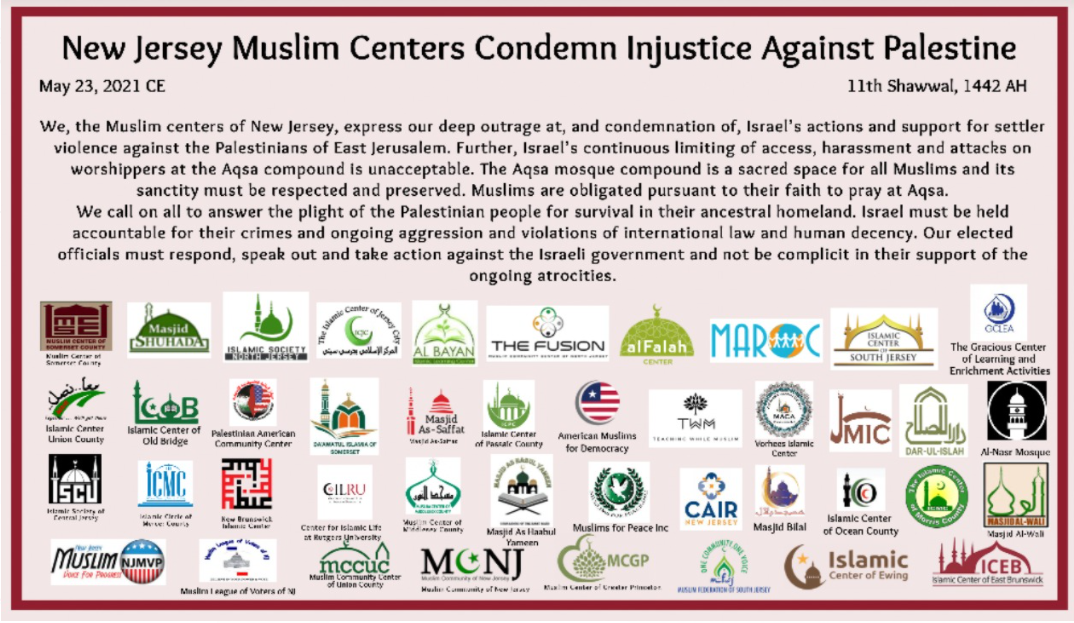 (SOUTH PLAINFIELD, NJ, 6/11/2021) – The New Jersey chapter of the Council on American-Islamic Relations (CAIR-NJ) today joined a coalition of 42 New Jersey Muslim Organizations in condemning Israel’s injustices against the Palestinian people. The organizations called for elected officials to act and speak up against Israel’s war crimes.

“We, the Muslim centers of Central New Jersey, express our deep outrage at, and condemnation of, Israel’s actions and support for settler violence against the Palestinians of East Jerusalem.  Further, Israel’s continuous limiting of access, harassment, and attacks on worshippers at the Aqsa compound is unacceptable.  The Aqsa mosque compound is a sacred space for all Muslims and its sanctity must be respected and preserved.  Muslims are obligated pursuant to their faith to pray at Aqsa.    We call on all to answer the plight of the Palestinian people for survival in their ancestral homeland.  Israel must be held accountable for their crimes and ongoing aggression and violations of international law and human decency.  Our elected officials must respond, speak out and take action against the Israeli government and not be complicit in their support of the ongoing atrocities.”

“Israeli soldiers have repeatedly stormed, and desecrated Al-Aqsa Mosque, the three holiest mosques in Islam, and attacked peaceful worshipers with impunity. It is time our elected officials hold Israel accountable for its crimes.

“For American-Muslims the illegal occupation of Palestine is a red line. US funding of Israeli apartheid must come to an end.”

Maksut also noted that New Jersey is home to well over 300,000 Muslims from countless ethnic and racial backgrounds and sects.