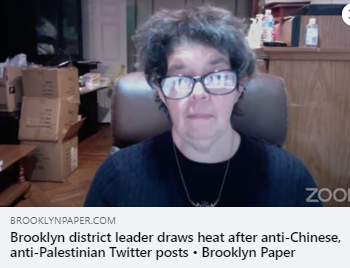 (NEW YORK, NY, 01/04/2021) – The New York chapter of the Council on American-Islamic Relations (CAIR-NY), the nation’s largest Muslim civil rights and advocacy organization, today called for Kings County Democratic District Leader of the 41st Assembly District Lori Maslow to resign following her disparaging and hateful remarks about Palestinians and Chinese-Americans in a series of tweets.

In one tweet, under the guise of religious scripture, District Leader Maslow used a popular call by far-right extremists as religious justification for genocide of the Palestinian people.

Maslow’s social media post stated: “You got your facts backwards. Palestinians kill Jews. Think we are going to stand there and let that happen? We value life. They don’t. Never again. And as the Bible says, and you shall wipe the children of Amelek off the face of the earth. Period. Shoot or kill us, we respond”

Maslow also posted anti-Asian posts that have been deleted.

Subsequently, Maslow has apologized for her anti-Asian remarks as a “poor choice of words,” and resigned yesterday from a ceremonial 6th vice-chair of the Kings County Democratic County Committee.

“District Leader Maslow’s social media posts are shocking and have no place in our political discourse. Maslow dehumanized Palestinians and engaged in disparaging and xenophobic remarks. She joined the chorus of far-right extremists who use biblical scripture as religious justification for the genocide of the Palestinian people. It is abhorrent and Maslow must resign immediately. Elected officials must be able to represent all constituents and Maslow has shown she cannot do so. ‎

“It is disturbing that the Kings County Democratic County Committee has remained silent while one of its members uses religious text to justify genocide of a people. ‎The KCDCC must condemn Maslow and demand her resignation. All elected officials must speak about against this hate speech. Muslim New Yorkers are paying careful attention to see which elected officials will step up to defend them from hateful and derogatory statements.”

Mohamed went on to condemn Maslow for her anti-Asian remarks:

“We also condemn Maslow’s anti-Asian remarks. Deleting posts and excusing her statements as a “poor choice of words” is not sufficient. Maslow must issue a real apology and resign her District Leader position.”